One day bloom. Next day gone

Evening. As sun goes down. Stern.

Between red nun and green can.

The moon, just shy of full, hung behind Curtis Island out over the bay. I rowed back with it at 12:30 (the position, not the time) off stern while navigating rear-view mirror through maze of moored boats.

While everyone else
Is so busy striving,
The lone traveler
Is at ease by himself.
He's been living outside of convention
For a long time now;
In his pouch there is nothing at all.
When he walks,
He takes a cane for a companion;
When he talks,
He has the rocks for an audience.
If you ask him what his religion is,
When hungry it's a bowl of rice.
- Wen-siang (1210-1280)

Listening to James Finley on Contemplative Prayer as I row. Earlier this morning in prison we read Dom Christian de Cerge's testament from Algeria written before his death to be read after.
Later we sit with the Buddhist sangha and chant the Heart Sutra that Tony leads. Our final contact was with Olin telling us of the terrific work being done, inmate to inmate, about learning to consider living beyond labels. We talk about a directed college study of Kristof Kieslowski's films.

Philosophers have sometimes argued that one of these fields is “first philosophy”, the most fundamental discipline, on which all philosophy or all knowledge or wisdom rests. Historically (it may be argued), Socrates and Plato put ethics first, then Aristotle put metaphysics or ontology first, then Descartes put epistemology first, then Russell put logic first, and then Husserl (in his later transcendental phase) put phenomenology first.

Consider epistemology. As we saw, phenomenology helps to define the phenomena on which knowledge claims rest, according to modern epistemology. On the other hand, phenomenology itself claims to achieve knowledge about the nature of consciousness, a distinctive kind of first-person knowledge, through a form of intuition.
http://plato.stanford.edu/entries/phenomenology/

The chapel is full and present.

Only silence and stillness can do it service.
Posted by meetingbrook at 10:00 PM

It's funny when the mind thinks about the psyche,
as if a grasshopper could ponder a helicopter.

It's a bad idea to fall asleep
while flying a helicopter:

when you wake up, the helicopter is gone
and you are too, left behind in a dream,

and there is no way to catch up,
for catching up doesn't figure

in the scheme of things. You are
who you are, right now,

and the grasshopper, the one that thinks
you're a helicopter, leaps onto your back!

He is a brave little grasshopper
and he never sleeps

for the poem he writes is the act
of always being awake, better than anything

you could ever write or do.
Then he springs away.

Tell me about the Real Presence -- about the relationship of Form to Emptiness -- about where light goes when it goes 'out.'

What's that? Nothing to say? Hello?

Perhaps no one has ever seen God because God is not outside anything. That, and the possibility that what is 'inside' anything inside is only vast and open and empty space.

Of course I believe in God.

You have to be 'in' God to believe anything.

Mostly I believe that to return to God is to be really present, as who you are, right now.

Two eleven year olds played with Rokie a long while this afternoon -- to the delight of their doting grandfather with whom I drank coffee.

At conversation tonight we wondered about consciousness, form & emptiness, and true religion.

-- Why?
-- Because it is fun! And, too, we restore you because of who you are., Mallory Ringess, the pilot who will never die, ha, ha! We give you our memories because you must know.
--I don't want to know anything.
__ Oh, ho, listen, Man, and we'll tell you everything1 Do you hear the waves whispering the secret? We know you know, Man. The secret of life is just sheer joy, and joy is everywhere. Joy is what we wre made for. It is in the rush of the nighttime surf and in the beach rocks and in the salt and in the air and in the water we breathe and deep, deep within the blood. And the shifting ocean sands and the wriggling silverfish and the hooded greens of the shallows and the purple deeps and in the oyster's crusty shell and the pink reefs and even the muck of the ocean;s floor, joy, joy, joy!
-- No, life is pain, I know. There's a poem; I remember some of it: "We're born in our mother's pain and perish in our own."
-- Life will not perish. We give you these memories so life will not perish.
-- I remember the song of the Host of Restorers.
-- All of the hosts are restorers. That is what we are; that is what we do.
-- I don't want to be restored like this.
-- It is a great song, isn't it? Do you hear the song?
-- I'm afraid.
-- Ha, ha!

The song of Agathange is a great song, but it is a song most human beings would care to hear. Some parts, of course, given the wholely human heritage of that mysterious race, are understandable. Humans and god-men (or even most gods, I think) share the knowledge that matter and consciousness are inseparable. The knowledge is old; ages ago the mechanics found that it was impossible to describe the behavior of subatomic particles without considering the effects of consciousness on the objects they were studying, just as it was impossible to explain the disasterous thermodynamics and poisoning of the Earth, all the while ignoring the conscious and criminal actions of billions of human beings. ...So, the Agathanians revere the unity of consciousness and matter, and they have pushed their belief to the logical end. The ten thousand hosts of restorers were trying to awaken the whole of their planet to greater consciousness. The song tells of the great restoration: The first ecologists had not trusted their miniscule consciosnesses. Had man's consciousness saved Old Earth? No, and neither would Agathange be saved, because man was man, and someday -- even though they made themselves like seals and took to the sea -- the natural harmonies would be broken. Only by creating a consciousness far beyond their own, a World-soul, could they sing a song of total joy, which, after all, is what they sought to do.
(--pp.254-255 in Neverness, novel by David Zindell)

Philip Levine is named to be new Poet Laureate. A 1999 poem by Mr. Levine is called “He Would Never Use One Word Where None Would Do” and ends:

Fact is, silence is the perfect water:
unlike rain it falls from no clouds
to wash our minds, to ease our tired eyes,
to give heart to the thin blades of grass
fighting through the concrete for even air
dirtied by our endless stream of words.

A silent song where words have grown familiar with not being spoken.

Not-being, spoken, is silence and joy!
Posted by meetingbrook at 2:46 PM

Seeing into Nothingness
This is the true seeing,
The eternal seeing
- Shen-hui (8th cent)

Last meeting of course in prison, Philosophy of Friendship.

There's nothing left but what we have.

Do you see anything not there?

That's the idea!
Posted by meetingbrook at 10:00 PM

Once born, stay aware of birth.

Once living, stay aware of life.

If you haven't attained clear, true vision,
This causes you to lapse into extremes,
So that you lose contact with reality.
- Yuan wu (1063-1135) 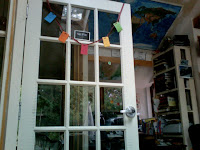 Once we begin to die, stay aware of birth and life.

Have I forgotten anything?

Oh yeah -- with gratitude for any and all love: my parents, my friends!

With continuation and good will for each.

I leave three pennies on bell buoy off-shore.
Posted by meetingbrook at 11:11 PM

Just to feel human. That's what an inmate rehearsing Hamlet said about how he experienced the process of being directed in a play by a tough and caring director. It's This American Life -- always a good bet.

What I call perfection of seeing
Is not seeing others
But oneself.
- Chuang-tzu (3rd cent BC)

"I am Laertes," says one of the actors. He means it. Not just the part he played, but the realization of himself as not other than Laertes.

Being nowhere else is finding oneself everywhere.

ST: In the context of this aching or longing, how can we understand this idea of “the Palace of Nowhere” as our ultimate destination?

JF: The phrase comes from the Taoist sage and poet Chaung Tzu, who wrote: “Come with me to the palace of nowhere, where all the many things are one.” We therefore use the phrase “palace of nowhere” as a metaphor for contemplative fulfillment. That is, the palace of nowhere is a state of awareness in which we realize directly that ultimately nothing is real but love. Or that ultimately nothing is real but God. Or that ultimately the concrete immediacy of life itself is the concrete manifestation of the divine. The reference to “nowhere” means that as soon as we try to back up, to stand and claim what we seem to have found, that it will all slip through our fingers again. And so I deliberately use the phrase “palace of nowhere” to allude to this great paradox. The nowhere is the infinite ground of everywhere.

ST: If you were to imagine for a moment that Thomas Merton was still alive today, how do you feel he would be responding to the current world situation?

JF: I was in the monastery with Merton in the 1960s, during the Vietnam War. The Berrigan brothers would come there to visit him, and he corresponded with people like Boris Pasternak and Bob Dylan. He was one of the Catholic intellectuals who helped fuel the peace movement. My sense is that what Merton would say today would be consistent with what he was saying then. That is, we face the individual dilemma of estrangement from contemplative experience and the preciousness of our own lives, as well as society's estrangement from this awareness. And that estrangement perpetuates violence. Therefore the task of the contemplative today is to be a prophetic witness – a nonviolent witness to the preciousness of all life, at a level that precedes and transcends all ideological positions.
(- From interview with James Finley by Sounds True, http://contemplativeway.org/interviews/mertoninterview.html)

We are the prisoners we visit.

There's no need to resolve or justify or rationalize.
Nothing is real but love.
Posted by meetingbrook at 5:15 PM