The bald doctor feels he is healed even if the cure lags behind. It's the same phrasing a woman named Anita Moorjani uses to describe her return from near death coma and advanced cancer.

I listen to REM's "Everybody Hurts." I wonder how it is I'd never heard the song in the 20plus years it has been around. I send it to a young woman in Maryland coming through her second spinal surgery.

The futurist Kurzweil thinks he will live without dying. The cusp is at hand. Death thou shalt die.

Maggie is nearing death. We chanted a farewell yesterday to her worn and weary body. Her husband and two sons were in the room as we arrived and left. Walt is stricken. After 72 years together.

As curious as curious is
life is
just so
curious.
Posted by meetingbrook at 11:56 PM

with only their faces showing

Here are faces that remind us life is personal.

Politics draws us away from human feeling.

Can you experience the feeling? The sorrow, the anger, the innocence, and the importance of paying attention?

Swedish photographer Paul Hansen won the 2012 World Press Photo award Friday for newspaper Dagens Nyheter with a picture of two Palestinian children killed in an Israeli missile strike being carried to their funeral.

The picture shows a group of men marching the dead bodies through a narrow street in Gaza. The victims, a brother and sister, are wrapped in white cloth with only their faces showing.

"The strength of the pictures lies in the way it contrasts the anger and sorrow of the adults with the innocence of the children," said jury member Mayu Mohanna of Peru. "It's a picture I will not forget."

Hansen's Nov. 20 shot won top prize in both the spot news single photograph category and the overall competition. It portrays 2-year-old Suhaib Hijazi and her 3-year-old brother Muhammad, who were killed when their house was destroyed by the Israeli attack. They are being carried by grieving uncles, as their father Fouad was also killed, and his body can be seen in the background of the picture.

The children's mother, whose name was not provided, was in intensive care.

"This prize is the highest honor you can get in the profession," Hansen told The Associated Press. "I'm very happy, but also very sad. The family lost two children and the mother is unconscious in a hospital."


Love, they say, is what this day is about.

Posted by meetingbrook at 9:45 PM

Consciousness with disappearance is born nature; awareness as opening presence is unborn nature

And if I did have anything to say, I would say it in the wind.

"And God said
Prophesy to the wind, to the wind only for only
The wind will listen."
(--from poem, Ash Wednesday, by T.S. Eliot)

But I have nothing.

Except this: Awareness is consciousness with disappearance into opening presence.
Posted by meetingbrook at 11:54 PM

Some facts are out of the question

One man speaks to the nation. Another kills one more person in California then burns to death after shot heard in cabin hideaway. Armies kill thousands, sharpshooters hundreds. No equivalency. No moral. Just facts.

Whistleblower or liar? The Los Angeles police department will reckon their losses.


Nobel peace exemplar or high tech hit man to all perceived enemies? Power is so overt.

Facts are not dreams.

What is attractive about facts is their reluctance, of themselves, to wear disguises.

But in the hands of authorities and potentates they seldom ever resemble themselves.

The wrong of any injustice, however, smolders.

Any questions?
Posted by meetingbrook at 10:20 PM

A child is born to Nicholas and Alexandra near Washington, D.C.

здоровье для всех! (Health to all!)
Добро пожаловать! (Welcome!)
Posted by meetingbrook at 6:57 AM

on hearing the news the Pope will step down

It is time to go. What mysterious grace will be at work in the election of what comes next?

Maybe a triadic revelation will overcome the catholic church.

From trinity to triadic inspiration: we will elect a cleric, a religious, and a layperson -- one of whom must be a woman.

These three will begin a new thing, and scripture will concur: "See, I am doing a new thing! Now it springs up; do you not perceive it?" (Isaiah 43:19) 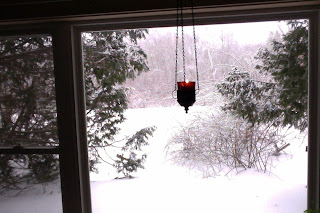 Come Holy Spirit, and renew our faith in what is of God with us!

Posted by meetingbrook at 3:05 PM

Edges falling upon everything 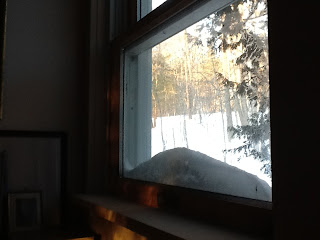 And the nothing that has not changed? The listening. The quiet stillness where breath finds no one there to impede passage from one mountain to another mountain. Breath is wavering shadow of cedar branch on white pillow, sketch canvas of appearance, a solitary showing, brief display, fleeting glimpse of artist's impression, ah! The kindness of evanescent duration! 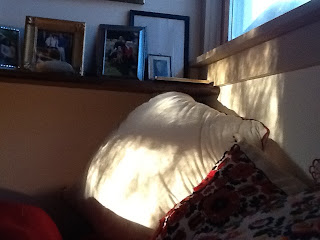 Does the hand know it is a hand? Does the chair know it is a chair? No! It is thinking/naming that says so. So, in the absence of thinking, where is the hand and chair? They are nowhere to be found.
...
Only consciousness is ever truly present, knowing and being itself eternally, taking the shape of sensing, perceiving and thinking but never being or becoming anything other than itself. The presence of all seeming things properly belongs to consciousness alone.
(--Rupert Spira, p.184, in Presence, The Intimacy of All Experience, Vol II, c.2011)

The two people in their car during blizzard found both warmth and death. Seeking one the other slipped into back seat to sit awhile with them taking shelter from digging out.

The Catholic Church reminded the faithful that it need not be a serious sin if egregious circumstances keep them from attending mass this Sunday.

Toboggan racers cram snow bowl to compact into one day what blizzard shortened from two.

There will be coffee. 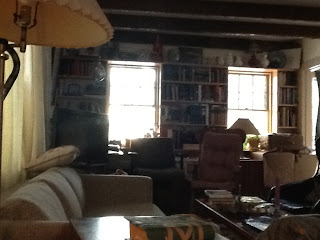 I cannot imagine any longer what resembled understanding back when fear and longing for anything other than what is here now presenting itself would drive headlong from despair to desperation. A time without shoveling, prayer, or coffee.

What do you want from this cajoling appearance we call our lives? If we look around we see, like Stevens' blackbird:

Thirteen Ways of Looking at a Blackbird
(By Wallace Stevens)

Among twenty snowy mountains,
The only moving thing
Was the eye of the blackbird.

I was of three minds,
Like a tree
In which there are three blackbirds.

The blackbird whirled in the autumn winds.
It was a small part of the pantomime.

Icicles filled the long window
With barbaric glass.
The shadow of the blackbird
Crossed it, to and fro.
The mood
Traced in the shadow
An indecipherable cause.

O thin men of Haddam,
Why do you imagine golden birds?
Do you not see how the blackbird
Walks around the feet
Of the women about you?

I know noble accents
And lucid, inescapable rhythms;
But I know, too,
That the blackbird is involved
In what I know.

When the blackbird flew out of sight,
It marked the edge
Of one of many circles.

At the sight of blackbirds
Flying in a green light,
Even the bawds of euphony
Would cry out sharply.

He rode over Connecticut
In a glass coach.
Once, a fear pierced him,
In that he mistook
The shadow of his equipage
For blackbirds.

The river is moving.
The blackbird must be flying.

It was evening all afternoon.
It was snowing
And it was going to snow.
The blackbird sat
In the cedar-limbs.

It is stanza nine (IX) that rivets my attention. The edge. Even as it gives way to circles beyond itself. The never-ending going there, flying through edges no longer edges.

The light has moved from pillow-canvas. 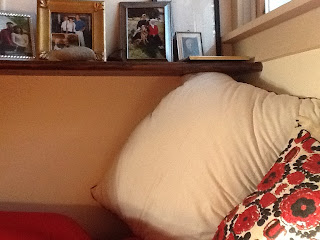 Until the nothing that it is gives itself to next our awareness wherever consciousness sketches itself within what calls itself into change and nothing but your loving gaze falling upon everything.