Therese today. And friends in prison move to new facility.


We had warm, wet weather all spring.
Now, white autumn is clear and cold.
Dew frozen, drifting mists gone,
Bottomless heavens open over this
Vast landscape of clarity,
And mountains stretch away,
Their towering peaks an unearthly
Treasure of distance.

These fragrant woodland chrysanthemums
Ablaze, green pines lining the clifftops:
Isn't this the immaculate heart of beauty,
This frost-deepened austerity?
Sipping wine, I think of recluse masters.
A century away, I nurture your secrets.
Your true nature eludes me here,
But taken by quiet,
I can linger this exquisite moon
Out to the end.

I'm sure of nothing.

And there I remain.
Posted by meetingbrook at 11:01 PM


The ways of proclaiming
The Mind all vary,
But the same heavenly truth
Can be seen
In each and every one.

Sitting at Rockport Harbor reading students' papers, the tide comes in. New moon high, it sloshes against and between granite blocks across canal sluicing Goosefare runoff.

The mere fact of it!

Enormity of water, nature, and being-here!
Posted by meetingbrook at 11:24 AM

Children of light and the day, says morning, faithful to our parents.

If you can see a thought as it arises
This awareness will at once destroy it.
Whatever state of mind should come,
Sweep it away, put it down.

Both good and evil states
Can be transformed by mind.
Sacred and profane appear
In accordance with thoughts.
- Han Shan Te Ch'ing (1546-1623)

I've been mistaken. I thought there was something other than love and truth. I've been wrong.

There is nothing other. Everything goes out from and returns to love. Everything originates and finds completion in truth.

Tell all the Truth but tell it slant

If we are not what we think we are, what are we?

This is the truth: I am what I am.

"God is with us." (Responsory to Ps.87, morning Eucharistic service)

What a lovely name!
Posted by meetingbrook at 7:23 AM

Goose and gander. Actions have consequences. Do as we say not as we do. They hate our freedom (to do whatever we want to do). One bad turn deserves another.

Fattal began by recounting the horrible conditions of the prison in which they were held, including being kept virtually all day in a tiny cell alone and hearing other prisoners being beaten; he explained that, of everything that was done to them, "solitary confinement was the worst experience of all of our lives." Bauer then noted that they were imprisoned due solely to what he called the "32 years of mutual hostility between America and Iran," and said: "the irony is that [we] oppose U.S. policies towards Iran which perpetuate this hostility." After complaining that the two court sessions they attended were "total shams" and that "we'd been held in almost total isolation - stripped of our rights and freedoms," he explained:

The world is a dangerous place. What we once considered a good and moral thing -- telling the truth -- is now a very dangerous thing to do. Ask whistle blowers. Ask anyone in prison who tells what he sees. Ask the Mexican journalists murdered for writing stories about drug cartels. Ask political detainees anywhere.

My Christian friends like Jesus, that he stood up to those in power, that he was killed for their sins, and that they are saved in and by his blood. Perhaps what they do not understand is Jesus. He stood for what is right, personal, individual and communal, what is true and holy, immediate and real. He, (the Christian heretic might say), might not have been so interested in dying for anyone's sins. He wanted to show that life, the heavenly kingdom, was not some future time in some faraway place -- that it was right there right then as it is right here right now.

To understand Jesus, it has to be considered that he was born (came to earth), lived in the world (as not-other than the world), and went about doing good (teaching and healing), with engagement, kindness, and compassion, and presented a different, more mysterious point of view about heaven, God, and the true hidden nature of existence -- namely, the question: how do we come to see, understand, and dwell in the reality of God? He brought an unusual perspective. He saw something new and diaphanous when he looked at whomever and whatever was right in front of him. He was put to death because the powers that be, political and religious, considered him a dangerous antidote to the poison of control, security, and fear.

It is a counter-Christian stance to glory in the death of someone by attributing his death to a God-willed good thing that benefits you. But that's just my view of a monday in September. 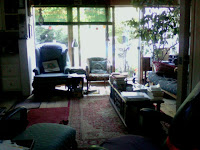 Independent of material existence,
Which is ever an obstruction,
Do not cling to deluded thoughts.
These give birth to illusion.

Attentively contemplate this mind,
Empty, devoid of all objects.
If emotions should suddenly arise,
You will fall into confusion.
(- Han Shan Te Ch’'ng, 1546-1623)

It was not a theater-piece of playacting intent on pleasing some producer-director. Not a performance after which, removing makeup and showering, he attends a post-play party shaking hands and sipping drinks. For the life of me I cannot relate to the triumphalism of evangelical murder -- the motif of sacrificial lamb or scape-goat carrying our sins to their deaths while we watch from a safe place and cheer them on.

What am I saying?

I'm saying that the language of God is God (as Rushdie put it) and that we are inadequate translators and interpreters. All our 'sacred scriptures' are a series of writings, like all writing, requiring discussion, debate, disagreement, conversation, and a humility that allows the open to remain open when we come to the realization that only God is God and we are not the managers of the One we call God.

To Be Elsewhere
BY HSIA YÜ, TRANSLATED FROM THE CHINESE BY KAREN AN-HWEI LEE

We met in a coastal village
spent a lovely night without leaving an address
going separate ways. Three years later
we meet again by coincidence.
The whole
three years spun a novel
we abandoned:
They fail to recognize themselves
as though meeting in another story
for an encounter.
One asks: Who are you, so cold and weary
The other says: I only know a thread is loose on my sweater
The more you pull it, the more it lengthens
until I completely vanish.
(Source: Poetry, June 2011).

I don't know who Jesus is in other people's minds. He disappears from viable view the more he is made some celebrity who, having been murdered in the movie is readying himself to have eternally tortured or summarily murdered those who don't like his performance or don't live up to some purity of creedal belief or excellence of behavior.

Is this why so many of Jesus' (so-called) followers are OK with torture? Is this why it is so easy to kill people in war or in abortion clinics (with scalpel or gun) or in death chambers of state prisons? If you believe your guy is the prince of slaughtered innocence for your benefit, it is a short walk over to the executioner's weapon to keep the world safe for the saved who now live in cahoots with those same people who killed Jesus.

I'm not buying it.

I'll wait for the next bus.

In the meantime I meditate on the words of the early scribes, retranslated, who wrote: "The reality of God is between you."

You might have had it translated: The kingdom of God (or, heaven) is within you (or, among you, or, in your midst).

For the time being, I'm going to look around, look at each one of you -- look at every branch, stream, rock, bird, harbor seal, and sentient creature -- and contemplate the difficult and startling possibility that we've not seen it yet because:

The reality of God is between us.

And if (possibly) that is true, then where do we think we are when we ignore, insult, use mindlessly, harm, or kill the one -- that which is -- with and near us?

Let's take a hike and think about it.
Posted by meetingbrook at 1:16 PM

They go their own ways.