I don’t want to write about the twenty two year old cop whose funeral was Friday. It saddens me. So I’ll quote a passage from Colum McCann’s novel:

The doctor turned with a shrug. Oh, God. Oh. We pulled two very simple wooden chairs up by his bed. Teach me who I might be. Teach me what I can become. Teach me.

The doctor came in, clipboard to his chest. He spoke, quietly, of internal injuries. A whole new language of trauma. The electrocardiogram beeped. Adelina leaned down to him. He was saying something in his morphine haze. He had seen something beautiful, he whispered. She kissed his brow. Her hand on his wrist. Heart monitor flickering.

Outside and inside St. Patrick’s Cathedral his colleagues and family showed up to pray over and put him to rest, as they say.

Across the world, in Vietnam, Thich Nhat Hanh’s body is chanted over and cremated.

Up and down the east/northeast coast today a blizzard.

Posted by meetingbrook at 8:06 PM

good fire changing one form to another

Posted by meetingbrook at 4:23 AM

It will snow today

As if this were Maine

Posted by meetingbrook at 3:55 AM

The teacher is here

There, everywhere, and nowhere—

more or less, there or here

believe there's a God." "There is

he said, "there you are, Godless."

Posted by meetingbrook at 12:37 PM

this step follows this step

Walking, I step in his footprint;

Seeing mist, I look into his spirit —

How lovely this companionable solitude!

Posted by meetingbrook at 2:44 AM 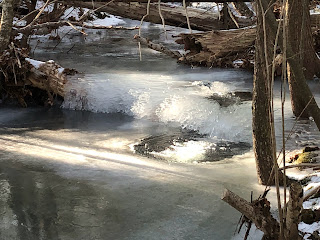 What does frozen brook in winter look like?
This, alas, is our practice. 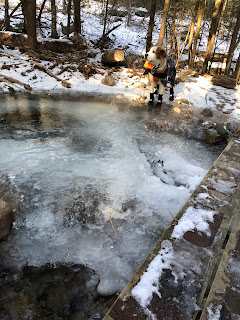 This, at last, is where culture is earth in all its robeless, bowlless, ruleless, reiteration of resonant ordinary everyday experience, sound, and appearance.
Looking through, into, and across what-is manifesting itself at center of attention and presence.
Turning around to see what is calling through silence.
Saying 'yes' -- welcome, sit a while, care for some water?
Hands-together, I bow to you and this!
Posted by meetingbrook at 11:51 AM

“Are you still here?” Asked

of Zen students, God, and old

Take refuge on your own island of self.

Posted by meetingbrook at 11:34 AM

where no idea but in practice itself

Some monks and nuns chant

sounds across space, some let sound

no concept no thought

pervading the rising of

itself as itself through sound

In response to the story:

He Was in Witness Protection in Maine. But His Harlem Life Kept Calling,    (In Lewiston, Maine, a man who called himself Abraham helped his neighbors with the trash and rode dirt bikes with his friend. His old life in New York City got him killed.)

When Two Minus One Equals Nothing Left (a Waka for Abraham)

Can you hear it?

across the universe, d'ou parlez-vous

Clang into night air their call —

If you pray, do now

That’s what Buddhism is, and

Posted by meetingbrook at 11:31 PM

From her paper about a play by Thich Nh’ât Hanh by Olivia Rawlings-Way in 2004:

At 12.30 a.m. on July 5, 1967, in the village of Binh Phuoc, Gia Dinh Province, a group of strangers abducted five young men, brought them to the bank of the Saigon River, and shot them. All five were volunteer workers in the School of Youth for Social Service, [the SYSS] a non-violent organisation that sought only to heal the wounds of war and reconstruct the villages. Their names were Tuan, Tho, Hy, Lanh, and Dinh. Tuan was a Buddhist novice.

Four died immediately. The fifth, Dinh, survived, but his clothes were soaked in blood and he lost consciousness. The strangers thought all five were dead, so they left.

Silence on the river. There are many stars in the sky, but no moon. A small sampan comes gently to the shore. Mai appears. The sampan is large enough to take the four, only four, because the fifth, Dinh, is still alive, and must stay behind. (9)4

This is where the play begins, just after the murders have taken place. Upon their raft, the five characters journey from the finite to the infinite, traversing the primordial waters of creation towards re- creation. Thus, the play unfolds as a metaphysical exploration of life beyond death; uniting the realm of the living with the realm of the dead, and offering assurance of the illusion of separation.

From the beginning of the play there is a sense of reconciliation and resolution in the dialogue. Upon the small boat that is to carry these spirits to ‘the other shore,’ the characters confront their deaths with serenity and acceptance. They laugh and banter, listen and remember, lucidly recalling the moment of their horrific deaths without sorrow or attachment and, most strikingly, with forgiveness. We are compelled to question how the murdered are able to forgive their murderers.

A principle teaching of Nh ́ât Hanh’s Engaged Buddhism, which is a pervasive theme in his poetry and this play, is the practice of ‘identifying the real enemy.’ Nh ́ât Chi Mai, one of the five characters in the play, was a young Buddhist nun who worked with the SYSS. In 1967, Sister Mai immolated herself for peace. She is also depicted as a bodhisattva. Throughout the play, Nh ́ât Hanh uses Mai’s voice as his own. She relates the notion of the ‘real enemy’:

Those who are shooting at this very moment do not know who they are fighting. All are victims...

Men kill because, on the one hand, they do not know their real enemy, and on the other, they are pushed into a position where they must kill…

So, men kill unjustly and in turn are killed unjustly, and it is their own countrymen who kill them...

The practice of ‘identifying the real enemy’ reflects the Engaged Buddhist emphasis on personal responsibility and inner transformation and it is grounded in the Buddhist belief in the non- duality of self and other. It is the false separation of self and other which causes suffering; ultimately, the true enemy is to be found in this fundamental delusion. Nh ́ât Hanh proposes that rather than objectifying our fear, hatred and prejudice onto the ‘other,’ we must transform the roots of violence within the self through spiritual practice. Our own inner enemies of fear, hatred and prejudice can be transformed and the non-duality of self and other can be realised. The Dalai Lama has called this ‘internal disarmament.’5 Nh ́ât Hanh’s essential teaching is that the only way to create peace is to ‘be peace.’ He further proposes that the realisation of the interdependence of self and other can induce the complete empathic identification with the perpetrator or the oppressor which gives rise to understanding and non-judgment. This practice of non-dual identification reveals that the perpetrators of suffering are in as much pain as their victims as they suffer from ignorance of their true selves and the true nature of reality. Such understanding gives rise to compassion and forgiveness.

(—from, ‘The Path of Return Continues the Journey’ – Engaged Buddhism and the Prajñāpāramitā Heart Sūtra in the Popular Theatre of Thích Nh ́ât Hanh! By Olivia Rawlings-Way, conference paper, January 2004)

The author concludes her paper with the following:

Nh ́ât Hanh has spoken of his initial response to the deaths:

I was in Paris when I heard about the assassination of four students of the School of Youth for Social Services, a school I had helped start. I cried. A friend said, ‘Thây, you should not cry. You are a general leading an army of nonviolent soldiers. It is natural that you suffer casualties.’ I said, ‘No, I am not a general. I am just a human being. It is I who summoned them for service, and now they have lost their lives. I need to cry.’21

The idea that artistic creation can function as religious praxis is prevalent in many schools of Buddhism. To repeat Mai’s comment: ‘Every artist is capable, through his art, of reaching the supreme objective of life itself.’ (33) This line can be read as an instance of authorial intrusion. With regard to Nh ́ât Hanh, his art is the art of narrative creation inspired by spiritual practice, and the supreme objective is love. For the author, the play embodies the transformation of individual suffering into an offering of forgiveness, reconciliation, hope and compassion. Thus, I would suggest that the play is as much a personal spiritual rite and a profession of faith and love, as it is an expression of grief. Understood in this context, the play becomes an act of communion with the dead. Ultimately, it reads as a celebration of life, an act of worship; homage to those who died, a poetic eulogy of praise.

‘The Path of Return Continues the Journey’

Initially, The Path of Return Continues the Journey appears to be a simplistic poetic drama, a quiet meditation upon life and death. However, penetration and analysis reveal an elucidation of the teachings of Engaged Buddhism and the metaphysics and dialectic of the Prajñāpāramitā teachings, profound in its theological insight and authentic in its dramatic expression. The skill of the bodhisattva, the upāya, is the ability to convey the teachings in ways that are suitable and understandable to whoever is being addressed. Thích Nh ́ât Hanh’s ability to translate the complexities of Buddhist philosophy through metaphoric and symbolic mediums deems him the exemplar of a bodhisattva, or indeed, a ‘Buddha of Suburbia.’

Posted by meetingbrook at 8:23 AM

up with me, I sulk

For some, a very few I suspect, that which separates is that which joins.

“Love enables us to see things which those who are without love cannot see. Who will be gone and who will stay? Where do we come from and where shall we go? Are the other shore and this shore one or two? Is there a river that separates the two sides, a river which no boat can cross? Is such an absurdly complete separation possible? Please come over to my boat. I will show you that there is a river, but there is no separation. Do not hesitate: I will row the boat myself. You can join me in rowing, too, but let us row slowly, and very, very quietly.”
-- Thich Nhat Hanh, from the introduction to his play, “The Path of Return Continues the Journey"

Either oar will move the boat. But it takes two oars to set the passage straight.

It is the passage through the water that makes the river whole with both shores.

There’s something we’ve got

it only feels that way

We’re actors in a play

a story being written by us

one step — one word

Posted by meetingbrook at 4:04 AM

Posted by meetingbrook at 3:25 AM

the dead. For those who see now —

Posted by meetingbrook at 3:20 AM

Who wins the football games, they

End, then all go home

Posted by meetingbrook at 11:31 PM

We come to believe the stories thrown at us over and over.

The film Under Suspicion (2000) is a study in such narrative absorption. It startles. After all, we are stories being told. Who shapes and determines the narrative?

So too, the difficulty with those controlling the narrative of our religious ethos and understanding.

Many elements of the Bible seem lifeless and unbelievable because they have been regarded as historical facts instead of metaphorical representations of spiritual realities.

We’re uncertain about the story told about our lives. About life itself.

It is time to look at what story we are living.

Posted by meetingbrook at 1:25 PM