That men and women traffick others into the sex trade against their will is a disgrace and failure of compassion we must confront.

THE 15-year-old had been “trained” in prostitution in a nightclub in the southern Romanian city of Calarasi. Now, the sex traffickers were getting ready to sell her off to a Turkish brothel for $2,800.

Iana Matei, Romania’s leading advocate for the victims of trafficking, had made contact with the girl and offered to wait outside the nightclub in her car, ready to take the teenager away if she could get out on the street for a cigarette break. But the girl had tried to escape before, and had been beaten severely. Ms. Matei was not sure she would have the courage to try again.
(--opening lines from THE SATURDAY PROFILE, Rescuing Young Women From Traffickers’ Hands, By SUZANNE DALEY, Published: October 15, 2010, The New York Times, http://www.nytimes.com/2010/10/16/world/europe/16romania.html)

When I think of chastity or celibacy I think of the non-sex trade. All slavery is heartbreaking.

If you can get through
The world by following
The Way and embracing
Virtue to the end of your years,
It can be said that you are able
To embody the Tao.
- Huai-nan-tzu

I offer this heart to those who are enslaved. And to those enslaving. All are in need.

Maybe our needs truly understood will diminish our wants.

We must learn to recognize the problem.
The problem is belief in separation and the illusion of disconnection.
See beyond problem and illusion!
Posted by meetingbrook at 11:37 PM

In prison today Pat suggested the lack of self-responsibility on the part of so many in the world.

Ryan quoted from a film where an AA sponsor claimed we have an agreement, a covenant with each other not to go crazy on each other.

The world is unstable, like a house on fire. This is not a place where you stay long. The murderous haunt of impermanence comes upon you in a flash, no matter whether you are rich or poor, old or young. If you want to be no different from a Zen master or a buddha, just do not seek outwardly.
- Lin Chi (d 867)

Don't go crazy on me.

We read in circle tonight.

Through green fog, red clouds,
Miles of bamboo,
To a hut where quiet lasts
Just let go and worries end
Stop to think and they're back
An unpolished mirror holds millions of shapes
A bell doesn't ring until it's rung
Your basic nature is the real Buddha
Not form or space nothing old or new.
- Stonehouse

Realized.
Posted by meetingbrook at 11:02 PM

The crisis of consciousness advances.

Make no mistake about it; if you do not find it now, you will repeat the same routines for myriad eons, a thousand times over again, following and picking up on objects that attract you.

We are no different from Shakyamuni Buddha. Today, in your various activities, what do you lack? The spiritual light coursing through your six senses has never been interrupted. If you can see in this way, you will simply be free of burdens all your life.
- Lin Chi (d 867

It's anyone's guess as election time nears and the irrational perdures.
Posted by meetingbrook at 11:55 PM

Of course there is a hell.

It's in all our stories.

Look in prisons. Look in the eyes of torturers and tortured. Look in the back rooms of pedophile's obsessions. Look in the anguished faces of abducted women forced to perform as sex-workers and men who have little humanity remaining them.

There is a hell. It resides in the decisions of governments to choose retaliatory war for acts only marginally connected with other governments which sit on geography laden with lusted after resources of minerals or oil or direct routes for transport of same.

Who marches into hell with a heavenly cause? How do mythic stories of heavenly or enlightened beings play in the world of pain and suffering promulgated as an economic strategy and national security priority?

Break open
A cherry tree
And there are no flowers,
But the spring breeze
Brings forth a myriad of blossoms!
- Ikkyu (1394-1481) 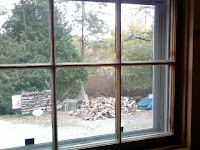 I can't help but marvel -- It is wonderful living in a place where the horror of war and terror of denied freedom is not felt personally with razor edged pain. It is a reminder that martial law, terror-as-tactic, and fear of reprisals for difference of opinion or belief, while not overtly sanctioned, is often hiding like a poisonous bite just out of sight, yet taking aim.

On mornings like this one -- when autumn air in Maine is cool at dawn and colors peek from mountain -- there is a lingering mood mingling with wood-stove smoke from house that says: Be grateful for the moment, and do not forget your brothers and sisters who need comfort in their suffering.

Tell me the one
about the sick girl —
not terminally ill, just years in bed
with this mysterious fever —
who hires a man
to murder her — you know,
so the family is spared
the blight of a suicide —
and the man comes
in the night, a strong man,
and nothing is spoken
—he takes the pillow
to her face — tell me
how he is haunted the rest
of his life — did he
or didn't he
do the right thing — tell me
how he is forgiven,
and marries, and has
2 daughters, and is happy —
no, tell me she doesn't
die, but is cured and
gives her life to God,
and becomes a hand-holder for
men on death row —
tell me the one where the man
falls in love with the girl
and can't do it, or
the girl falls in love
with a dog and calls
the man to tell him
not to come, or
how each sees their pain
mirrored in the other's eyes —
tell me how everyone is already
forgiven every story
they ever told themselves
about living
or not living —
tell me, oh tell me
the one where love wins, again
and again and again.
(--Poem, "Story" by Sabine Miller, from Circumference of Mercy. © Mountains and Rivers Press, 2010.)

Some say all of this existence is just story. Stories all the way down. Once, upon a time, until, the end. 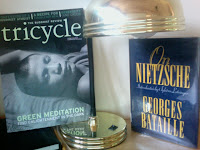 Some others say that this existence is a testing ground or experiment in human quality for humans and a time of extended reach for other beings upward to a humanity seen as highest experience of sentience on precipice of an ascension beyond our ken.

Still others point out that earth is a statistical anomaly where the only life in the universe exists. Scientists and Ufologists have a different opinion -- but await further evidence.

Species have come and gone on earth.

Over 98% of documented species are now extinct, but extinction occurs at an uneven rate. Based on the fossil record, the background rate of extinctions on Earth is about two to five taxonomic families of marine invertebrates and vertebrates every million years. Marine fossils are mostly used to measure extinction rates because of their superior fossil record and stratigraphic range compared to land organisms.

Since life began on Earth, several major mass extinctions have significantly exceeded the background extinction rate. The most recent, the Cretaceous–Tertiary extinction event, occurred 65 million years ago, and has attracted more attention than all others as it marks the extinction of nearly all dinosaur species, which were the dominant animal class of the period. In the past 540 million years there have been five major events when over 50% of animal species died. There probably were mass extinctions in the Archean and Proterozoic Eons, but before the Phanerozoic there were no animals with hard body parts to leave a significant fossil record.

Estimates of the number of major mass extinctions in the last 540 million years range from as few as five to more than twenty. These differences stem from the threshold chosen for describing an extinction event as "major", and the data chosen to measure past diversity.

Some feel the insignificance of life on earth has to be viewed in a larger context.

Earth at a Glance: Fast Facts

Location -- In the Solar System, on the outer edge of the Milky Way, about 28,000 light years from the galactic center (Source: European Space Agency). It takes the solar system 225 million years to make one full trip around the Milky Way.
Closest Major Galaxy -- Andromeda, about 2.3 million light years away.

Distance from the Sun (average) -- About 93.1 million miles (also one Astronomical Unit or AU). -- It is the third planet from the Sun.

Rotational Speed -- About 1,070 miles per hour at the equator.

Rotational Tilt -- 23.5° on its axis, a straight line through the planet from the North Pole to the South Pole. The tilt is in relation to Earth's near circular orbit around the sun.

Gravitational Pull -- One Earth Unit. This measurement is relative to other objects in the universe. Earth's gravity is the force that pulls objects toward the center of the Earth and is measured by the Earth's mass. Gravity is what gives objects their weight. Without gravity, the Earth's spin would fling everything on the planet out into space! See Earth's Weight (Mass), below.

Earth's gravitational pull on another object. And the Earth cannot pull on itself! As the Earth orbits the Sun, it is weightless. If the Earth were placed on the Sun, it would weigh more than if it were placed on Jupiter, the largest planet in the solar system but much smaller than the sun. Yet, Earth (or any other object for that matter) would have the same mass regardless of where it is located. 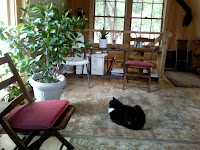 Meanwhile, the black and white cat is bothered by fleas. The white and black dog plays with green tennis ball. Brown leaves lay curled on crushed gray stone in front of barn doors.

We celebrated Canadian Thanksgiving yesterday with turkey, potatoes, and squash after canoeing Megunticook Lake into headwinds forcing us to turn and run into quiet cove where someone lay on floating dock curious about our appearance.

We long for peace and freedom for every species.

And if heaven has any cogency, let it be among and within us here and now.

Tell the story of the cherry tree and the spring breeze.

There is so little we can do about injustice in the world.

We can be just. We can be loving.

It's a beginning.
Posted by meetingbrook at 9:38 PM

You sit. You breathe. Just that.

People are illogical, unreasonable, and self-centered.
Love them anyway.

If you do good, people will accuse you of selfish ulterior motives.
Do good anyway.

If you are successful, you will win false friends and true enemies.
Succeed anyway.

The good you do today will be forgotten tomorrow.
Do good anyway.

Honesty and frankness make you vulnerable.
Be honest and frank anyway.

What you spend years building may be destroyed overnight.
Build anyway.

People really need help but may attack you if you do help them.
Help people anyway.

We're in this together.

As soon as everyone realizes this, the better things will be. 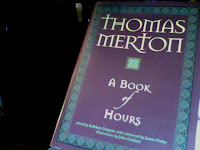 It's a great illusion, separateness.

Be done with it.