There are days that close in.

Close in.
Posted by meetingbrook at 10:39 PM

When are you tomorrow?


All sorts of useful things may be written in perfectly adequate prose: editorials, history, philosophy, theology, even lasting novels. But there is no such thing as a perfectly adequate poem, because a poem into which some strange and surprising excellence has not entered, a poem that is not in some inexplicable way beyond the will of the poet, is not a poem.
(--PROSE FROM POETRY MAGAZINE, In Praise of Rareness, “The more respect you have for poetry, the less of it you will find adequate to your taste and needs.” -- Christian Wiman) http://www.poetryfoundation.org/poetrymagazine/article/178842

Posted by meetingbrook at 4:15 PM

A prayer for Thursday

Dear One
Allow us
to be
you
With gratitude
Posted by meetingbrook at 3:50 PM

Oh how much trivial stuff there is in the world! Such as my thoughts, opinions, and resentments.

I am not fond of the Monsanto Protection Act signed into law by President Obama.

Curiously, I'm interested in the conversation some jurisdictions are having about mandating gun ownership by every household. Guns are not in my sights -- the poetry of Christian Wiman is.

2. 2047 Grace Street
But the world is more often refuge
than evidence, comfort and covert
for the flinching will, rather than the sharp
particulate instants through which God's being burns
into ours. I say God and mean more
than the bright abyss that opens in that word.
I say world and mean less
than the abstract oblivion of atoms
out of which every intact thing emerges,
into which every intact thing finally goes.
I do not know how to come closer to God
except by standing where a world is ending
for one man. It is still dark,
and for an hour I have listened
to the breathing of the woman I love beyond
my ability to love. Praise to the pain
scalding us toward each other, the grief
beyond which, please God, she will live
and thrive. And praise to the light that is not
yet, the dawn in which one bird believes,
crying not as if there had been no night
but as if there were no night in which it had not been.  (http://www.poets.org/viewmedia.php/prmMID/21964#sthash.G4vjG75A.dpuf )

The need for guns relies on the need to forget our true relationship to one another. It is easier to kill another out of hatred or fear than it is to say "I hate you!" and let it go at that. Or: "I am afraid of you." and let that sink in to everyone in hearing proximity. It would mean we are available to what we really feel.

We come up against a notion here which seems to me of capital importance but for which it is difficult to find an idiomatic English equivalent—at least neither I, nor the English translator of my previous work, Being and Having, managed to do so. The French terms I use are disponibilité and indisponibilité.  Literally, in English, one would render these as availability and unavailability, but it might sound more natural if one spoke of handiness and unhandiness, the basic idea being that of having or not having, in a given contingency, one’s resources to hand or at hand. The self-centred person, in this sense, is unhandy; I mean that he remains incapable of responding to calls made upon him by life, and I am not thinking merely of the appeals for help that may be made to him by the unfortunate. I mean rather that, over a much wider field, he will be incapable of sympathizing with other people, or even of imagining their situation. He remains shut up in himself, in the petty circle of his private experience, which forms a kind of hard shell round him that he is incapable of breaking through. He is unhandy from his own point of view and unavailable from the point of view of others.(--in Quantum Est In Rebus Inane, Philosophy, Literature, Logic, Language, and Orthodoxyhttp://kellydeanjolley.com/2011/07/18/212/)

I eat segments from grapefruit given Saskia by folks she liked so much staying at Mary House in Spencer near Trappist Monastery.

I wear Sterkowski Basque Beret from Warszawa arriving yesterday. It is oversized. I bought it a size or two larger than needed. You never know when size gives way to exigency.


If you do wrong and get beaten for it, what credit can you claim? But if you put up with suffering for doing what is right, this is acceptable in God’s eyes.It was for this you were called, since Christ suffered for you in just this way and left you an example, to have you follow in his footsteps. He did no wrong; no deceit was found in his mouth. When he was insulted, he returned no insult. When he was made to suffer, he did not counter with threats. Instead, he delivered himself up to the One who judges justly. In his own body he brought your sins to the cross, so that all of us, dead to sin, could live in accord with God’s will. By his wounds you were healed. At one time you were straying like sheep, but now you have returned to the shepherd, the guardian of your souls.

(--From the first letter of the apostle Peter 2:11-25, Christians are strangers in this world; ttp://divineoffice.org)

It is often mysterious what to think Peter or anyone else means by their words about "Christ" or "God." Time over Holy Week in stronghold of theological and liturgical catholic atmosphere deepens this mysterious metaphoric milieu of thought.

I become absent to my meanders.

While there I travel to evening wake then, next morning, to funeral and interment of mother of friend of Saskia. The memorials of mortality pass attention -- I will follow that way. And, truth be told, I'm not sure I care that such is the case even if it mattered that I cared. When I pray for the deceased, I pray, "God be with you!" I can think of no other words to say.

What does it mean to say: "God be with you"? Somewhere, someone translates: "Love be with you" or "Mercy be with you" or, "May you be at peace with what is with you." Maybe, if there is no "you" in the equation, one is saying. " May what is be what is!" This could be equally: "God is what is God."

These Poems, She Said

(--Poem by Robert Bringhurst, “These Poems, She Said”)

There is a need for words and a need to go beyond words. The unknown after death or the complete transcending reality evading perception or cognition -- is part of this absent meander.

"There is another world, but it is inside this one." - Paul Éluard

John Keats defined negative capability as a capacity for "being in uncertainties, Mysteries, doubts without any irritable reaching after fact and reason."

Even if not seeing.

What is; not me


Prayer does not reveal itself. Rather, prayer unveils the one praying, removing measurement and distance from awareness, leaving an unromantic gaze (as and into) the un-alone.

Nothing to pray to, nor to pray for. Only praying as.


In the eyes of many, hope may of course boil down to wishful thinking. [Gabriel] Marcel readily concedes that this happens many times, perhaps most of the time. Can hope escape this criticism? The answer is provided by the distinction between “hoping” and “hoping that. . . .” Genuine hope is unconditional hope. Genuine hope belongs to the field of “being” rather than “having” (another of Marcel’s favorite distinctions): the person who, “without any condition, without limitation, lives in absolute trust, shall experience the safety of ‘being’ or safety in ‘being,’ rather than the radical insecurity of ‘having.’” Absolute hope, beyond any condition and any image or representation, is interpreted by Marcel as the creature’s response to the infinite Being or even the absolute Thou—and here, of course, most if not all Buddhists will beg to differ.But we may be prepared to hear him when he observes: “Nobody can experience the lightness of living in hope unless he/she be fully liberated from the bonds of possession(s).” He adds, “We remain open to hope, even in a small way, provided there still are some cracks or chinks in the armor of possession, the armor of ‘having,’ built around us.” There is thus a fundamental distinction between hope and expectation, between hope and desire, between hope and self-centeredness. Hope—this is Marcel’s conclusion and last word—hope essentially is disponibilité (being or keeping oneself available, open, receptive).

Regarding the hopeless with fond emptiness is odd comfort. Sitting in Merton Retreat this Easter  Tuesday after walking vacated Snow Bowl where remnant melting mountainside holds sliding dusk silence in its fading tracks.


Expectations involve calculation, management, and—most of the time without our being aware of it (avidyâ)—the double-bind of desire: a relation of both controlling power and passive dependence between subject and object. Desire also includes a “spatialization” of time. All this is rather obvious in the question of the disciples after the resurrection of Jesus: “Lord, is this the time when you will restore the kingdom to Israel?” He replied, “It is not for you to know the times or periods that the Father has set by his own authority” (Acts 1,6-7). No answer thus, except perhaps the following: “You will receive power when the Holy Spirit has come upon you” (1,8). In order to realize that their question is meaningless, that it has no genuine object, the disciples will need a good forty or fifty days—or is it forty years, or forty kalpas?Hope seems quite close to the attitude of mu-shotoku: without expectation, without aim or intended object. Is it then a shift from object to subject? Or is it rather the attitude or quality of being unconcerned about subject or object? One should perhaps say: there is hope but no hoping individual—in the same way one says: there is suffering, but no suffering subject. To hope is to remain in this pure openness. Such an understanding and practice of hope would, in a paradoxical way, come quite close to the Chan and Zen tradition of “great doubt” (dai-gi). From a Christian perspective, one would dare say that the true subject of hope is “He who comes,” He who, through his coming, makes hope possible, is the source of hope, opens a space for hope. This coming One is the “Deus semper maior” (E. Przywara), the ever greater Godhead. (Ibid)

Prayer is misunderstood. It's not meant to get you anything or get you anywhere.

What then is prayer for?


"My God my bright abyss / into which all my longing  will not go / I come to the edge of all I know / and believing nothing believe in this:"
(--final stanza of unfinished poem by Christian Wiman, recent editor of Poetry magazine)

Edging toward what falls freely forever through nothing there being fallen through.

Tommy had a close call.  But he'll live some more. He said so in the call to him at VA hospital in Boston.

Hell, these days everything seems countdown. The old monk in kitchen door leaning on cane looked confused. He might have been looking for his friends who might have stopped by towards dawn for coffee and chocolate after long vigil. But they might have stopped coming years ago, having died, as his long gaze seemed to inquire whether they had returned as someone said they might.

We've got lies to tell.

Until no more.
Posted by meetingbrook at 10:28 PM

You, friends, are rising through truth and love. Truly, you are rising! Blessings of Easter -- be empty tombs -- out from encrypting rock! 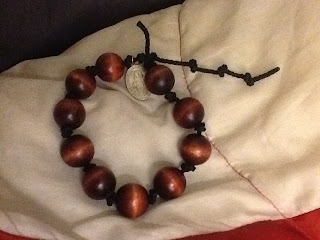 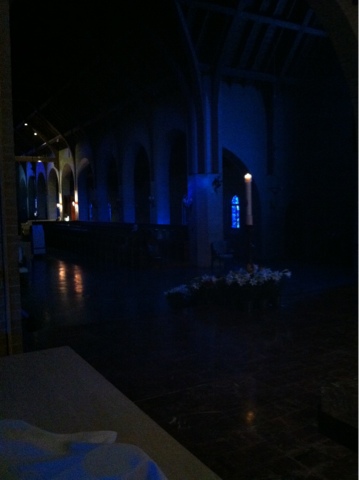