how can I help

What does it mean to be a nonaffiliated zen buddhist catholic christian idiorhythmic secular monastic practitioner in the world today?

I’m not taking any further questions this evening.

May you be happy, safe, free, and come to dwell in your true home!

Posted by meetingbrook at 11:03 PM

Posted by meetingbrook at 3:41 AM

toward the holy mind of reconciliation

Bless me, mother, for I have sinned.

A man of old has said: “Do not talk about the conduct of others if you don’t resemble them.” This means that, without knowing or studying a person’s virtues, one should not, upon seeing his weaknesses, conclude that he is a good person but suffers certain defects and does bad things. Look at just his virtues, not his shortcomings. This is the meaning of the saying: “The gentleman sees the virtues but not the shortcomings of others.” (SZ 3.8)

Help me, father, to see that what I see is me seeing, not what is there to be seen.

Posted by meetingbrook at 8:54 AM

must be the season of the hate

No good will come from

No good. Nothing hopeful comes

When hate loves the false

Posted by meetingbrook at 8:35 AM

very great praise, honor, or distinction bestowed by common consent; renown: to win glory on the field of battle.
something that is a source of honor, fame, or admiration; a distinguished ornament or an object of pride: a sonnet that is one of the glories of English poetry.
adoring praise or worshipful thanksgiving: Give glory to God.

to exult with triumph; rejoice proudly (usually followed by in): Their father gloried in their success.
Obsolete. to boast.

Also glory be . Glory be to God (used to express surprise, elation, wonder, etc.).
(Dictionary.com)
Posted by meetingbrook at 3:18 AM

It is his feast day today.

(—St. Thomas Aquinas, “That God is Universal Perfection,” in Of God and His Creatures, 64, www.ccel.org)

The sheer volume of his writings in theology, his dedication, is impressive. And with medieval philosophy and theology, intellectually demanding. Understanding is a labor both of attentiveness and capacity for it. (I seldom have either,)

Not infrequently, in different texts, Aquinas refers to a principle which he uses as a principle of explanation–a principle which avers that “whatever is received into something is received according to the condition of the receiver.”  Quidquid recipitur ad modum recipientis recipitur.  Cf. Summa Theologiae, 1a, q. 75, a. 5; 3a, q. 5.  In the Summa Theologiae, 1a, q. 12, a. 4, a more specific application of this principle is proposed in terms which say that “a thing known exists in a knower according to the mode of a knower.” Cogitum…est in cognoscente secundum modum cognoscentis.  For further references, see Summa Theologiae, q. 14, a. 1, ad 3; q. 16, a. 1; q. 19, a. 6, ad 2; Summa Contra Gentiles, 2, 79, 7; De Veritate, q. 2, a. 3.  In knowing anything, or in thinking that one knows anything, something is known by a prospective knower according to the mode of a knower’s being where what is understood and known is regulated or determined according to how a thing is known by a knower.  In the context of his systematic theology of the Trinity, Lonergan takes this Thomist principle and uses it to explain why ongoing development sometimes fails to occur in theology.  See Lonergan, The Triune God: Systematics, p. 25.  Seminal insights are not always well understood (as these insights come from major thinkers in the theological tradition as in St. Augustine, St. Thomas Aquinas, or Cardinal Newman) and the result can be a tradition of misunderstanding (constituted by truncated understandings) which introduces a distortion into the development of later theology

”Truncated” is such a workable word.

Take, for example, the definition of a truncated mean:

A truncated mean or trimmed mean is a statistical measure of central tendency, much like the mean and median. It involves the calculation of the mean after discarding given parts of a probability distribution or sample at the high and low end, and typically discarding an equal amount of both. This number of points to be discarded is usually given as a percentage of the total number of points, but may also be given as a fixed number of points.

The phrasing I am familiar with goes, “Whatever is received is received according to the personality of the one receiving it.”

And if our personal development is stunted or truncated, what is received is partial or distorted.

Such an understanding suggests why we seem to have such difficulty comprehending and thus acting upon justice, compassion, or integrity in the realm of either politics or human discourse.

Beyond that, intentional truncation for personal advantage dealing with the public, complicates further the transmission of necessary truths and implementation of same.

Thomas told us. He let us in on our difficulty. It is a problem of reception.

It is the task of receiving and passing on that often evades or makes onerous our facility or capability.

Add to that a reluctance to faithfully retransmit even what we do receive with clarity or dedication to its truth — and we have what we have today.

And so, we take to practice.

A practice of receiving, of being open to receiving, a practice of taking in and letting go without actively obfuscating what is passing through, a practice of allowing value to be amplified through integrative participation in wholesome transmission of actual fact and facticity.

Posted by meetingbrook at 4:22 AM

this is no longer politics

Fact is, republicans seem to have made a calculated choice that the majority of Americans want the government to implode and be destroyed to be replaced with some kind of authoritarian autocratic regime under republican banner.

Hard to believe they think, ultimately, this is a desirable choice.

There is a sharp turn ahead in the road.

I’m uncertain the careening car of tr**pism will make the curve without crashing over the edge and smashing the country into steep fall.

Take away their license.

Put them in the drunk tank.

For God’s sake, stop the cruel and deluded lemming run.

Posted by meetingbrook at 11:34 PM

what we are to be doing

Be merciful and forgive people.

Be hospitable and welcome people.

Liston to what people are saying.

Act in such a way that the well-being of each is primary.

When dissension arises pay attention to the  sound of what is being said. 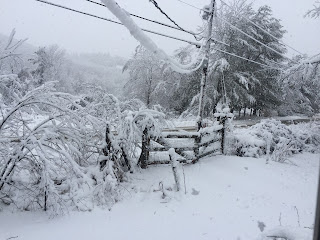 Is the way of Jesus a model for political action in contemporary America?
Forget the religious denominations and the saccharine preaching about heavenly salvation and favorable status in a believing club.
It is a crucial time.
The crux of our moral essence is on trial.
There is a line we cannot cross without losing what is on either side of the line.
It is an excruciating time.
Hate and obfuscation threaten to annihilate any remnant of kind or compassionate life in the world.
What is to be done?
What is
Is to be
What we are
To be doing.
Jesus is dead.
Christ is risen.
Are we willing?
To face?
Who we are?
And what we are?
Doing?
Posted by meetingbrook at 8:36 AM 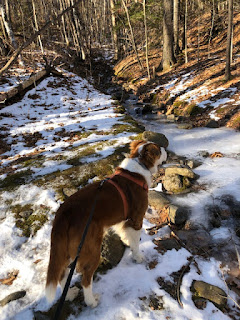 Mountain holds its counsel until lower falls outside meetingbrook path. 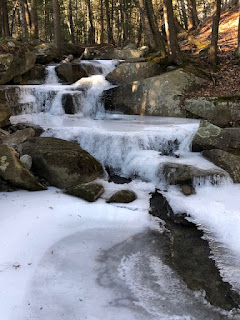 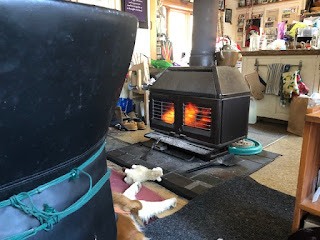 At home, Ensō stretches into fourth week at hermitage as his cat companions also nap upstairs and just above him in cat-tower while human companions sip tea and hot chocolate working on excel numbers and scraps of philosophy.
Posted by meetingbrook at 1:12 PM

What do you say we are?

"What are human beings, that you think of them; mere mortals, that you care for them?" (Psalm 8:4 Good News Translation)

Though suppressed, Pico’s speech was printed, again and again. It begins with an interlocking set of statements about human nature, as mysterious as they are sonorous:

In Arab memorials, Most Reverend Fathers, I have read about Abdala, a Saracen: when asked what was the most astonishing sight to be seen on this stage of the world—so to speak—he answered that there was nothing to see more astonishing than man. Supporting his opinion is that saying of Mercury: Man is a great miracle, Asclepius.

Pico goes on to describe man as “an interval between fixed eternity and flowing time and (as the Persians say) the bond—no, the wedding-knot—of the world, a little lower than the angels, according to David,” and to evoke man’s power—unique among the creatures of the universe—to admire and love the orderly splendor of God’s creation and to rise above that to union with God.

There are times I think human beings are natural antagonists. Or maybe self-serving opportunists. Then I put down the politics section of the New York Times or Washington Post, pour a cup of coffee, and wonder how it is we haven't yet destroyed ourselves.

And we think so highly of ourselves. Who makes more money? Who looks better? Who has a nicer home?

If God is What Is True, I long for God.

And for you to be there too.

Posted by meetingbrook at 11:41 AM

I notice people my age are dying.

First, I say a prayer for them

Then, I look to see if my reflection looks back from mirror.

Posted by meetingbrook at 11:21 PM

There are bad cards

Some gamble. Some cheat. Some fold.

Some walk away, down stairs, out door —

If you look up, a sky

Posted by meetingbrook at 9:22 AM

Conversatio, the manner of life. 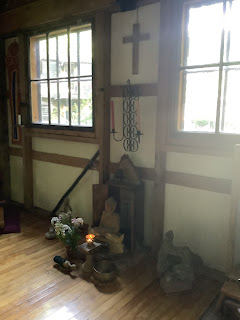 Paul, they say, is celebrated today. The memory of his conversion.

When the formless becomes unapparent presence.

When we don’t know what is happening with us.

When the way of life becomes our life.

When nothing else is, only God is.

Go ahead — put some sticks into the firebox —listen to organ pipes from France.

the practice of disappearing into...ça va

It is rare to comprehend God. Or God’s attributes. I am not among the rare.

God is beside, within, and beyond each thing each being in existence.

Presence is the name of God. God is nothing if not present.

Don’t bother looking for God. Give up searching.

There is no seeing God. God is what is seen through.

Man’s stupidity is God’s laughter. Man’s arrogance is God’s theater of the absurd.

“If you trip, I am the falling. If you delight, I am the smile.”

“Can we make coffee now? Is it time to pray yet?”

Prayer is the practice of disappearing into God.

“There you are, my little cauliflower, mon petit chou-fleur!”

About face! Forward march! Sound off! One, two, three, four!

The sleeping cat has never asked, not once, about God. What a saint!