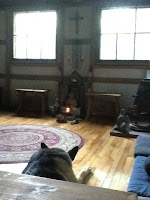 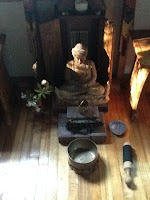 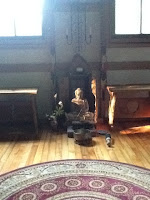 Posted by meetingbrook at 10:10 PM

If God is now being revealed, what is Christ?

Christ is creative expression of this revelation.

Christ-mind is aware-ing this ever-new origin in everydayness. 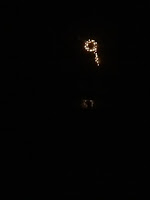 Posted by meetingbrook at 2:39 AM

no solution of continuity


I finish the finishing of what I thought I'd finished yesterday for the university. I understand, now, the term and the mythos behind the statement "mail it in."


Man becomes aware of the sacred because it manifests itself, shows itself, as something wholly different from the profane. To designate the act of manifestation of the sacred, we have proposed the term hierophany. It is a fitting term, because it does not imply anything further; it expresses no more than is implicit in its etymological content, i.e., that something sacred shows itself to us. It could be said that the history of religions — from the most primitive to the most highly developed — is constituted by a great number of hierophanies, by manifestations of sacred realities. From the most elementary hierophany — e.g. manifestation of the sacred in some ordinary object, a stone or a tree — to the supreme hierophany (which, for a Christian, is the incarnation of God in Jesus Christ) there is no solution of continuity. In each case we are confronted by the same mysterious act — the manifestation of something of a wholly different order, a reality that does not belong to our world, in objects that are an integral part of our natural "profane" world.

The world is, indeed, a curious, if not mysterious, place.

It's a wonder we're not more insane than we already are!
Posted by meetingbrook at 2:22 PM

Give us Roy Hobbs

So this is what it feels like to be on the receiving end of education's glancing eye!
.
The final hours, work submitted, a Nietzschean 'amour fati' (love of one's fate) settles over everything like a waiting room in Pen Bay Medical Center. Every minute following blood tests and body scans under powerful scrutinizing machines is not dissimilar to the post-posting countdown following submission of what could be considered the only blood you had available, the only organs ready for viewing. To mix the metaphor, it is the old prison movie where tight cinematic shots move from man strapped in electric chair (or on contemporary gurney) to warden standing by wall phone, to executioner whose hand is steady with legal justification and writ of personal exoneration based on employment duties. The clock is an ebb tide millimeter by millimeter advancing naked sands at midnight.
.
Will the call come through? Will the reporters in the viewing room write that a last minute stay of execution postponed the dismal derogation of death? Will the physician's face reveal useful information during those contracting steps nearing waiting room and anxious faces?
.
Here is where students choose a path: Harden to the unbeknownst? Or melt in uncertainty?
Of course, the student knows they forgot to answer this or that, forgot to add specific details on syllabus, forgot to correlate guidelines to actual product. But the time is past for reconsideration. "Go ahead," the hostage says (in yet another metaphor), "pull the trigger. I'm tired of the threats, the sequencing of escalating demands, the dropping away of fabricated dignity in the face of an unadorned dangerous reality of proximate terror." (By this time the kidnapper is quizzical and chagrined. Who talks like that to someone with a gun pointed at them?)
.
Enough already!
.
I grow more sympathetic to the intended and unintended anxiety of educational systems and procedural expectations at service to more accountable civic and academic credentialing. It is the way we winnow the willing-but-unwinsome from being where they might not best be, from doing what is best distributed elsewhere. Who would want a bat boy pitching or batting with two outs, two on, bottom of 9th? No, give us Roy Hobbs, whether on the mound or at the plate. Let the bat boy hand him the bat, exchange meaningful glance, then step back toward dugout.
.
I admit to not being fond of the fair but exacting guidelines of online teaching protocol. But fondness peels no potatoes. I do, however, assent and affirm the necessity. As well as the good efforts and calm guidance afforded by the facilitators.
.
In Mary Shelley's words, “Invention, it must be humbly admitted, does not consist in creating out of void, but out of chaos; the materials must, in the first place, be afforded...”
(-- Mary Shelley, 1831, Frankenstein, Introduction.)
.
You have afforded us. We are not thrown into the void. Now...the waiting! The disconsolate endgame. The footsteps! The eyes on the wall phone.
.
Fade to lighter shade of gray.
.
Thank you for the opportunity!
Posted by meetingbrook at 9:29 AM

Bowing to Life
To bow is to no longer hold ourselves apart from the unpredictable nature of all of our lives; it is to cultivate a heart that can unconditionally welcome all things. We bow to what is, to all of life.- (--Christina Feldman, "Long Journey to a Bow")

Everything belongs.
Posted by meetingbrook at 7:23 PM

Rowing out to and around Curtis Island -- wind, tide, and swells all were kindly.

Happy to be able to enjoy this gift given.