in email, someone sends excerpt from Fowles novel

Quote:
That simple phrase, I do not know, was my own pillar of fire. An ultimate, a metaphysical, I-do-not-know. For me, too, it revealed everything. For me too it brought a new humility akin to fierceness. For me too a profound mystery. For me too a sense of the vanity of so many things our age considers important. I do not say I should not have arrived at such an insight one day. But in that night I bridged a dozen years. Whatever else, I know that.
"In a short time we saw Henrik walk back into the trees. I could not see his face. But I think the fierceness it wore in daylight was the fierceness that came from his contact with the pillar of fire. Perhaps for him the pillar of fire was no longer enough, and in that sense he was still waiting to meet God. Living is an eternal wanting more, in the coarsest grocer and in the sublimest mystic. But of one thing I am certain. If he still lacked God, he had the Holy Spirit.
"The next day I left. I said goodbye to Ragnar. There was no lessening of her hostility. I think that unlike Gustav she had divined her husband's secret, that any attempt to cure him would kill him. Gustav and his nephew rowed me the twenty miles north to the next farm. We shook hands, we promised to write. I could offer no consolation and I do not think he wanted any, for there are situations in which consolation only threatens the equilibrium that time has instituted. And so I returned to France."
(--from The Magus, end of ch.44, by John Fowles)
Posted by meetingbrook at 11:47 PM

On 9/11 people jumped from the towers. One firefighter wondered later -- "I just remember looking up, thinking, How bad is it up there that the better option is to jump?"

Those 10-11 seconds of relief from inferno, flying between certain death and certain death, remain -- in itself-- a lifetime of "oh my, look at this" experience.

A woman named Betty at our shop the day after gave her opinion that "the instant they stepped off their perch they stepped into heaven" and were free of what followed on the ground.

My take on her view is (today) that it is less about life and death and more about stepping off the certain into the open with trust.

Betty was a woman of faith. I often do not understand faith. But I liked Betty. And I listened hard to her words.

(Betty died a few years ago. Saskia and I were asked to conduct a memorial service for family and residents at the Stella Maris residence in Rockland. It was a circle expression of wording & worded experience -- which is probably a good definition of what we are here as humans!)

Maybe faith is a stepping off our perches into the hands of G o d
Who presents Itself as the clueless understanding of this next thing we engage ourselves in doing between one and the other -- a dying yes to life which resembles a resurrection of life through death even as we live on through the unknown (Himself) seeing us through.

If I knew anything I'd shut up. Because I don't know anything I trytrytry to see what surfaces with underwater wording.


Posted by meetingbrook at 5:59 AM

I hate it when you brag about knowing nothing, because there's nothing to know.

About trust: there's only trust, and, (here's the kicker) there's nothing to trust.

The subjective act of trust and presence incorporates what we mistakenly think is something or someone "out there" to trust or be present with.

Zen is this moment revealing itself as no other.
Posted by meetingbrook at 10:46 PM

Which side of cynicism do you choose?
Trump's or Clinton's?
I choose neither.
I choose each particular act of presence and trust.
After which there is no objective outcome at all.
All there is is the particular act. The particular trust.
Each time created new.
Moment to moment dwelling.
Only now.
Alone.
Posted by meetingbrook at 10:26 PM

dancing the sound of emptiness

Once, when there was God, we sang songs like this in ancient Israel:


Yet now you have rejected us, disgraced us;
you no longer go forth with our armies.
You make us retreat from the foe
and our enemies plunder us at will.

You make us like sheep for the slaughter
and scatter us among the nations.
You sell your own people for nothing
and make no profit by the sale.

You make us the taunt of our neighbors,
the laughing stock of all who are near.
Among the nations, you make us a byword,
among the peoples a thing of derision.

All day long my disgrace is before me;
my face is covered with shame
at the voice of the taunter, the scoffer,
at the sight of the foe and avenger.

Then, when we no longer sensed there was someone who did something to us, we went silent.
We caught sight of a silence that confounded:

When we lost touch with our imagined origins and fell into a ground of being, we then thought it would be useful to wrap up our experience of falling with structures meant to convey our whereabouts.

If you read Philip Kapleau’s most recent book: Zen Merging of East and West, you will find him clearly stressing the fact that Zen is a religious practice. Roshi, how do you respond to people who try to make Zen into a secular therapy or a mind-opening experience? Is Zen effective that way, or does it need to be rooted fundamentally in a religious dimension of life and culture?

I usually say, if you want to use Zen in this way, you can do it. You can use it as a therapy of one kind or another. But this is comparable to taking a tiny bit of the cream off the top of the bottle of milk. There’s a good deal more to a bottle of milk than just the cream on top.

But someone did ask me in Majorca just recently, “Is Zen a religion?” I said, “It all depends on how you define religion.” The word “religion” comes from the Latin word religare, which means to bind—to bind one, of course, to God. Zen doesn’t teach us to be bound to anything. The teaching is to experience our innate freedom.

If one thinks of religion as an organized body of beliefs, dogmas, creeds, and a belief in vicarious atonement, then, certainly, Zen, by Western religious standards, is not a religion. On the other hand, if you think of religion as something that teaches a person to answer the fundamental questions that every human being has asked, like “What is the meaning of my life? Why was I born? Why must I die?” then Zen definitely is a religion. So it’s all in how one looks upon religion.

One of our members actually wrote in and said that she joined the Center in order to have Zen, not to have religion. She wanted to take the Zen without the Buddhism. You can do that. But you would be just skimming the cream off of the milk. I think you’re cheating yourself, really, because these traditions and all of these practices come out of a 2,500-year­long experience working with the human mind. And when these masters tell us that these practices are vital to the whole process of bringing us to awakening, then we would do well not to disregard them. And besides, when you do the full body of practices, it’s a wonderful feeling. So you can’t lose, really.

(--from, The Speechless Speech of Roshi Philip Kapleau, Radio host Lex Hixon’s conversation with the American Zen pioneer, By Lex Hixon, FALL 2016, TRICYCLE (--conversation is from a 1979 radio interview of Roshi Philip Kapleau conducted by Lex Hixon, a scholar and author who hosted the program “In the Spirit” for 17 years. http://tricycle.org/magazine/philip-kapleau-zen-master-speech/?utm_source=Tricycle&utm_campaign=187bf9e4dc-Daily_Dharma_10_27_2016&utm_medium=email&utm_term=0_1641abe55e-187bf9e4dc-307306085

Perhaps the final word could be changed and the final sentence transformed into a question:  ‘So you can’t lose reality?’

You might argue that reality is reality, ground is ground -- and there would be reasonable discussion with such an observation. Still, we would have to consider that in such a formulation everything would have to be included. Elemental cosmology and psychological neurology.

This cosmo-chemistry-stuff is not free-standing. It sisters neuro-psychology. Side by side the material and immaterial, the physical and spiritual coexist in interrelated act/being without separation or isolation. One and the other move together through the worded categories of space and time as a triadic one-an-other space/time realization. Whatever ‘realization’ is conceived to be it is the operative dynamic within the co-originating inter-dependency of any movement within existence or without being (if such a realm can possible be said to participate in our imagination.)

In simpler words: what-is, and what-we conceive-to-be, are connected. What is taking place in the world, and how we receive and interpret with mind/soul/spirit that which we experience as taking place in the world, are of a piece, forming a continuity singularity. This unique movement depends on   an efficient interplay of inner/outer to sustain a stillness that extends throughout and throughout.

Throughout release and freedom.

Can we lose reality?


The old pond; a frog jumps in —the sound of the water.

Not if we jump in and dance the sound of emptiness.

Posted by meetingbrook at 10:21 AM

There is a distemper coursing through our culture these days.

It seems fashionable to be rude, crude, and threatening.

Kindness and consideration are considered weakness and derogation.

Is there still time?
Posted by meetingbrook at 7:46 PM

As if the warm weather could last.

As if anything could.

November to get ready

For its stark transition

Into emptiness
Posted by meetingbrook at 11:21 PM

we hand out red noses at practice last evening

at table, we are clowns

as the perennial argument

who could take anything said

by someone wearing a red clown’s nose

seriously
Posted by meetingbrook at 7:55 AM

this is what becomes of me

You and I are the hands and feet of the cosmos building and traveling itself into its next expression.

There is something we do not understand, namely, who we really are in the evolving expansion of the universe, in the minute to minute breath of this breathing body glancing at these words.

We are the earth, the cosmos, the universe, all of (what we call) creation -- in its current expression on its way to who knows where who knows what.

First, rely on the spirit and meaning of the teachings, not on the words;

Second, rely on the teachings, not on the personality of the teacher;

And fourth, rely on the essence of your pure Wisdom Mind, not on judgmental perceptions.

We are not isolated, not separate, not detached. We are, rather, moving through this life and existence with one another in ways we cannot see nor understand.

Some are dubious of this absence of understanding and do not like the suggestion of a connection not initiated by them. This is understandable. It is difficult to trust what is not seen nor understood.

And still the earth, the cosmos, the universe moves through us as we are moving through it.

Would that wisdom were as simple as a cup of coffee.

Brew it. Pour it. Sip it. It becomes you. You become it.

This Sunday afternoon in October, this is what I’ve become. 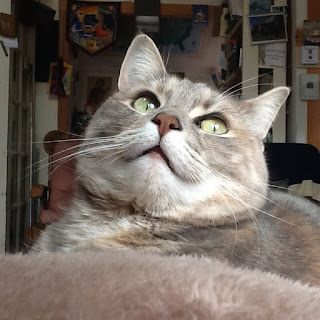