Meditation is realization in this moment of who-I-am.

Jeremiah laments, letter by letter, pleading: "Return again to the Lord your God."
Posted by meetingbrook at 6:07 AM

Note: all formal events at meetingbrook will not be held Thursday, Friday, Saturday, and Sunday.
A good holiday to each!
Posted by meetingbrook at 12:45 PM

"Whatsoever therefore is consequent to a time of Warre, where every man is Enemy to every man; the same is consequent to the time, wherein men live without other security, than what their own strength, and their own invention shall furnish them withall. In such condition, there is no place for Industry; because the fruit thereof is uncertain; and consequently no Culture of the Earth; no Navigation, nor use of the commodities that may be imported by Sea; no commodious Building; no Instruments of moving, and removing such things as require much force; no Knowledge of the face of the Earth; no account of Time; no Arts; no Letters; no Society; and which is worst of all, continuall feare, and danger of violent death; And the life of man, solitary, poore, nasty, brutish, and short." (Hobbes, from Leviathan)

But if, "The world is Being-Itself" -- then we are beings attempting to realize our true being-in-the-world. The metaphor leads the reality we follow. Amos Wilder (1895-1993), Harvard Biblical Scholar, wrote: "The language of a people is its fate."

To me this suggests that what we call ourselves is what we become. The metaphors we use, the descriptors we employ, are roadmaps to a destination we are far too often surprised and shocked to be arriving at. We need to both watch our words, and word what we see ourselves becoming.

Sally McFague in Speaking in Parables: A Study in Metaphor and Theology (1975), wrote:
Amos Wilder has written that "the language of a people is its fate."

Any human language represents a special kind of order superimposed upon existence. Generations live in it as a habitat in which they are born and die. Outside of it is nescience. . . . Perhaps one can say that nothing affects the significance of human existence more than the range and resource of our articulation, vocabulary, syntax and discourse.1

It is almost a common assumption now that human beings are linguistic -- this, and not our reason (understood abstractly, non-linguistically) is what is most distinctive about us We are the ones who speak (reason or conceptualization is dependent on linguistic symbolization), who name all things and thus give order to our world and give ourselves a past and a future. George Steiner has written:

That articulate speech should be the line dividing man from the myriad forms of animate being, that speech should define man’s singular eminence above the silence of the plant and the grunt of the beast is classic doctrine well before Aristotle. . . . Possessed of speech, possessed by it, the word having chosen the grossness and infirmity of man’s condition for its own compelling life, the human person has broken free from the great silence of matter. Or, to use Ibsen’s image: struck with the hammer, the insensate ore has begun to sing.2

It is not only a philosopher such as Martin Heidegger who speaks of language as "the house of being," but almost universal notion that human beings are linguistic through and through.2b If one notices the way an animal looks at something as against the way we do, the difference is language -- we can do something other than smell things and decide whether they are good to eat or dangerous. We can remember, generalize, hope, particularize, compare, contrast, wish, and so on, all because the object before us is also a "word," a symbol, that can enter into all sorts of relations with other symbols.
http://www.religion-online.org/showchapter.asp?title=452&C=364 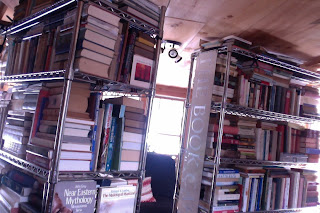 If word becomes flesh and goes ahead of us toward an outcome both uncertain and undetermined, our language might wish to be carefully integrated with our imagination as we proceed toward our chosen and articulated destination.

Body meditates and mediates.
Posted by meetingbrook at 12:51 PM

It is a week of death, of passing over, of biblical turning points and saying no to intubation.

Chinua Achebe earlier this week, and Marion Costin yesterday. These are family.

Mr. Appiah, a professor of philosophy, found an “intense moral energy” in Mr. Achebe’s work, adding that it “captures the sense of threat and loss that must have faced many Africans as empire invaded and disrupted their lives.” (--from NYT Obituary)

To be set free. To free. To see One-Another.

Jesus was curious. He asked: "Who do you say I am?"

A Mother In A Refugee Camp

No Madonna and Child could touch
Her tenderness for a son
She soon would have to forget. . . .
The air was heavy with odors of diarrhea,
Of unwashed children with washed-out ribs
And dried-up bottoms waddling in labored steps
Behind blown-empty bellies. Other mothers there
Had long ceased to care, but not this one:
She held a ghost-smile between her teeth,
And in her eyes the memory
Of a mother’s pride. . . . She had bathed him
And rubbed him down with bare palms.
She took from their bundle of possessions
A broken comb and combed
The rust-colored hair left on his skull
And then—humming in her eyes—began carefully to part it.
In their former life this was perhaps
A little daily act of no consequence
Before his breakfast and school; now she did it
Like putting flowers on a tiny grave.

Posted by meetingbrook at 8:12 PM

"Man can embody truth but he cannot know it."  (William Butler Yeats)

Nothing can be
Closer
To the truth.
Posted by meetingbrook at 10:42 PM

absent no one and nothing


This is the day I have entered so many places thinking I had it made, under control, aware of destiny and fate, ready to engage.

Only to find out I knew nothing, things fall apart, ignorant of what was before and behind, preparing to run away.

I don't dwell in that humbling land for too long. Each next step brings it back fresh and new in what presents itself. It is unnecessary to carry the failures of the past. Sufficient to say, and for the day, is what crumbles into the present on its way elsewhere.

(present here and now; absent no one and nothing)  (wfh)

It does not belong to us to determine who is in who is out. If, and I repeat, if, there is a guiding spirit of well-being and wisdom pervading all existence emanating emergence from beyond being, i bow and affirm the mystery.

Each thing, each ray, each object, each being is prophetic voice sounding in stillness phonemes of phenomenal noumena.

We listen. Aliquid stat pro aliquo.  (Something stands for something else). (Latin saying)

The semiotics of silence! 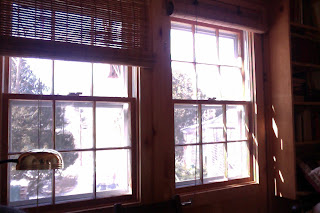 Darryl Whetter:  In your essay “How To Be Here,” you use the idea of haecceity. Does haecceitas announce a specific form or image? In the "creation" of a metaphor, are you recovering or achieving or finding something of that haecceitas?

Tim Lilburn:  John Duns Scotus, from whom this phrase and notion comes, says that the thisness of a thing is unknowable (given the mind as it is now), but there. It’s the highest expression of the thing, but it can’t be known with precision or named.

(-- Excerpts from “Listening with Courtesy: A Conversation with Tim Lilburn.”  Interview by Darryl Whetter.  [Studies in Canadian Literature, Fall 1997] http://finearts.uvic.ca/timlilburn/interviews.html

The "thisness" of the monastic monistic is only reached by attentive contemplation, a gazing that is open and welcoming.


Darryl Whetter:  In “Contemplation is Mourning,” there is a suggestion that “You will be shaved and narrowed by the barren strangeness of the / deer, the wastes of her oddness.” Is it important for us to be so shaved?

Tim Lilburn:  No. That’s coming at it the wrong way; you just are shaved if you look long and deeply without presumption. That’s a large part of what looking is, the refusal of presumption or caricature. Otherwise what you’re seeing is simply yourself; you’re looking in the mirror everywhere. Being shaved is just the realization that all of your notions of power and centrality are stolen or made-up, it’s stolen fire. Hard looking can relieve you of this.
(Ibid)

When the quiet allows me into its presence, I drop everything thereupon and there-within. I remain where I am -- in transition from this place to no place -- two sips of coffee with no between.

Saskia brought rosewater and bread for communion before Quakers arrived in Merton Retreat. We prayed for all asking or promised, took bread, took water -- were grateful. Dogs had small biscuits. Quakers arrived -- an hour of silence with them.

And I think, on seiza bench for that hour, again epigrammatically:

These bastardized fragments of Latin sayings -- an idle of a Sunday in March. Maybe mendicant prelude to poetry, not poetry itself. For poetry, as Milosz said, is different:


What I am saying here is not, I agree, poetry,

as poems should be written rarely and reluctantly,

under unbearable duress and only with the hope

that good spirits, not evil ones, choose us for their instrument.

Tim Lilburn:  I am interested in poetry because I believe that only in it can a person think and feel as deeply and as flexibly and as surprisingly as is humanly possible. This extreme, unexpected thinking and feeling is not only great fun, but is important now, in ways a little hard to fully explain, for us as a species. The strange metaphorical and contemplative thinking that goes on in poetry might just serve as a basis of a new politics that knits the human world with the natural world. It would likely take a whole book to work out this new politics. (--An Excerpt from the Great Victoria Public Library Website. Ibid) 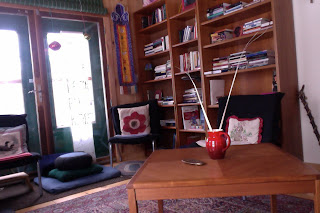 It is Palm Sunday.