Where am I in this

It's hard to figure out the truth.

Zen Master says the truth is "just like this."

On cushion this morning: god is this; god is in this; this is in god.

Where am I in this?

Don't ask, Herb would say, this is all there is.

Posted by meetingbrook at 11:02 PM

Kali stands for death in the service of life.

Metaphors reside in the body.

(--words recalled from Marion Woodman film, "Dancing in the Flames")
Posted by meetingbrook at 10:57 PM

Zen saying: Better to see the face than hear the name

Free will. The choice where we put our attention. That is still possible.


Fear is the glue that keeps civilization together. Without fear of consequence, men would take forcefully the women of their choice, elidi children would pull the wings off their younger siblings and women would tell their husbands their innermost thoughts. And that would be the end of the world, the end of the worlds on which human beings live. Without fear we would fly about at random like billions of unpredictable atoms. I must repeat that one does not fear a madman because he is dangerous; a madman is feared because he appears to have no fear, and therefore he is unpredictable and might do anything. And it is the same with warrior-poets. One does not fear them because they are dangerous; the sun, after all, is dangerous. But the sun is predictable (or it used to be before the Vild began to explode), and the  warrior-poets, those fearless fanatics of Qallar, are not. Often they act at random. Their passage through a crowd leaves a trail of fear, the fear of fearlessness, which is really a fear of randomness. To live in in a universe which does not listen to the plea for order and meaning is our most basic fear, and we fear it more than death.
(--p.312, in Neverness, novel by David Zindell, c.1988)

Those who speak soundly are poets of a profound and original peace.

Prophets, however, are not predictable; they are not fortune-tellers, not clairvoyant, not good at guessing. They are, rather, observant, clear-eyed, and unswayed by misdirection. They see the truth or falsity of what is presented, hear the tinniness or soundness of what is being said, smell the foulness or bouquet of what passes before them.

“This is the only way to bring faith to the public and the public to the faith,” Berrigan said softly as we spoke before the demonstration in the park that was once the epicenter of Occupy Wall Street. “If faith does not touch the lives of others it has no point. Faith always starts with oneself. It means an overriding sense of responsibility for the universe, making sure that universe is left in good hands and the belief that things will finally turn out right if we remain faithful. But I underscore the word ‘faithful.’ This faith was embodied in the Occupy movement from the first day. The official churches remained slow. It is up to us to take the initiative and hope the churches catch up.”

There is one place, Berrigan says, where those who care about justice need to be—in the streets. The folly of electoral politics, the colossal waste of energy invested in the charade of the Wisconsin recall, which once again funneled hopes and passion back into a dead political system and a bankrupt Democratic Party, the failure by large numbers of citizens to carry out mass acts of civil disobedience, will only ensure that we remain hostages to corporate power.

Berrigan believes, as did Martin Luther King, that “the evils of capitalism are as real as the evils of militarism and the evils of racism.” And he has dedicated his life to fighting these evils. It is a life worth emulating.
(--about Daniel Berrigan, from, "America's Street Priest", by Chris Hedges, Truthdig,10June2012)
http://www.truthdig.com/report/item/americas_street_priest_20120611/

Daniel Berrigan is in his 92nd year. I remember attending mass Berrigan celebrated in the Bronx at Fordham University in the late sixties. I happened to walk next to him in Norristown PA on an Ash Wednesday protest march during a trial in the late seventies. I listened to him read poetry, speak creativity to desolate souls, question the buttoned-down evil of war-making. Now an old man, he remains an annoying and fierce critic of the peculiar unquestioning insanity of public and private insistence on evil death and destruction masked as patriotism paternalism and preemptive pacification of the hoi polloi populace.

Thank you, Dan Berrigan!
You don't frighten me as you once did.

I've grown accustomed to your phrasing face.
Posted by meetingbrook at 7:35 PM

We come to; birth

We depart beyond; death.
Posted by meetingbrook at 10:09 PM

who hears it realizes

See things different. Hear, too, what you hear, differently.


Look. There was one who was enlightened with the sound of a bamboo being struck and another who clarified his mind upon seeing peach blossoms. Is the bamboo bright or dull, deluded or enlightened? Are peach blossoms shallow or deep, wise or foolish? Although flowers blossom year after year, not everyone who sees them is enlightened. When a bamboo cracks, not everyone who hears it realizes the way.   (--Dogen Zenji, 1200-1253)

There is no world to adjust to.  You are the world.

Do not adjust. Create.

Create what God is creating.

Quite a difference, don't you think...

I finish The Submission by Amy Waldman. It is over. A back-cover reviewer is right and wrong and right again in her blurb: "It's a literary breakthrough that reads fast and breaks your heart." (-Lorraine Adams)

It took me a long time to read. I did not want to finish the final chapter. 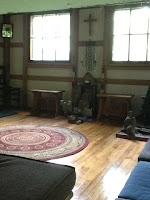 "Has any psychological experiment yielded a more delightful suggestion than this one: that there is a part of the mind without ambition or information, which nonetheless is expert on what is beautiful?"
--Kurt Vonnegut Jr.


The artist doesn't tell you what to think. That's the vocation of the pedant and propagandist, like the perditious (verdammenswert) politician, of which there is surfeit.

No, the artist tells us -- merely -- to think, to feel, to imagine. "Use your imagination," says the lead character in the novel. But, where, we ask, will that take us? 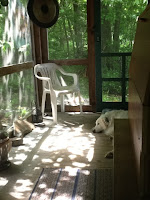 "I think a good poem should have some inscrutable part. You can't quite explain it. The poem can only explain itself to a certain limit and at that point you enter into a little bit of mystery. That for me is the perfect poem: to begin in clarity and to end in mystery."
--Billy Collins


Mystery is no four-square assurance of anything. Rather, we are placed in the middle of perpetual transition. Change, like water passing through the sound of a brook, is all we know of God, and all we get to look at arising and departing in our heart.

If you say you believe in God you are saying that you believe in this moment coming to be and passing away, this fleeting glimpse of emergence exchanging itself for the very next appearance to manifest what, itself, will evaporate in the following instant.

There is nothing to hold on to. And that 'nothing' is the pronunciating apotheosis of creativity. Here and gone, arriving and departing, seeing and dissolving -- the inscrutably beautiful come to visit just as we are leaving the premises.

Is heaven arriving without arrival?

Posted by meetingbrook at 4:43 PM

Posted by meetingbrook at 12:10 AM