There’s only one thing that matters in life: Arriving here, where we are, fully aware who we are where we are.

And there’s only one difficulty in life: We don’t want to be here. And yet here we are.

When you ride in a boat and watch the shore, you might assume that the shore is moving. But when you keep your eyes closely on the boat, you can see that the boat moves. Similarly, if you examine myriad things with a confused body and mind, you might suppose that your mind and essence are permanent. When you practice intimately and return to where you are, it will be clear that nothing at all has unchanging self.

–Great enlightenment right at this moment is not self, not other.

–Great enlightenment is the tea and rice of daily activity.

♦From The Essential Dogen: Writings of the Great Zen Master, edited by Kazuaki Tanahashi and Peter Levitt © 2013. Reprinted with permission of Shambhala Publications.

Why is it we pretend not to know who we are?
Posted by meetingbrook at 10:23 PM

They push each other around; these millionaires shoot baskets

No, this is not really about basketball.
Yes, we are beyond religion.

Instead we are merely religious, with no structure able to coalesce the longing for truth that rises from each person.

As an individual, become the thing itself you long for.

Become, religiously. without structure,  the empty wholeness of solitary communion.

Alone within community.
Posted by meetingbrook at 12:19 AM

Yes
The article said that punctuation was coming to its end
How silly is that
How would we know when to upwardly inflect
Or whether to pause before
Going on
Posted by meetingbrook at 5:57 AM

I don't know why

What is giving self away?

Oh, that's what is called Christ.

What generous love is, giving oneself away.

And where is away?

It is where your self was.

You say hello, I say goodbye. 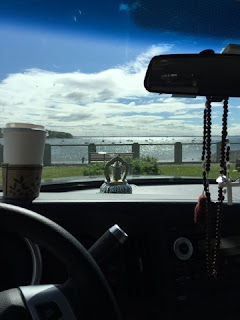 Posted by meetingbrook at 9:19 AM

I go to daily mass in order to meditate on the mystery of someone attending daily mass in coastal Maine late May early June after teaching is done and afterward, for $3 even, a 24 ounce coffee and chocolate donut which feels as holy as thin white wafer and minitaste of altar wine.

Which is that and isn't that at same time.

Which just might be nothing other than anything else only completely itself -- a reconciliation, you might say, of everything with everything else, as god is no judge, only itself among us.

It is structures of consciousness elbowing each other for seat in final pew then going silent while something repeats itself from front of church. A 10 year old boy, Schwinn bicycle leaning on iron fence in Bensonhurst, answering first line with ad deum qui laetificat juventutum meum.

Then, the falling into nothing I knew nor know.

And, no doubt, ever will be.

Amen
Posted by meetingbrook at 7:10 AM

Sun between top of window and top of trees. 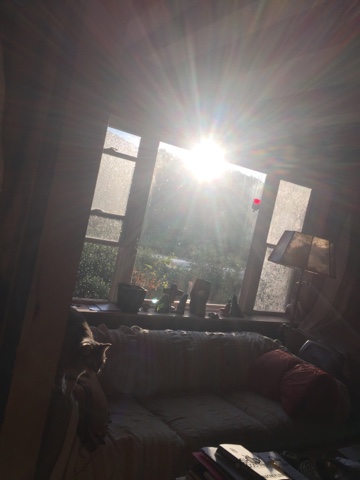 Red vigil candle recognizes, if you will, its source.
PantaRhea moves from east to north window. 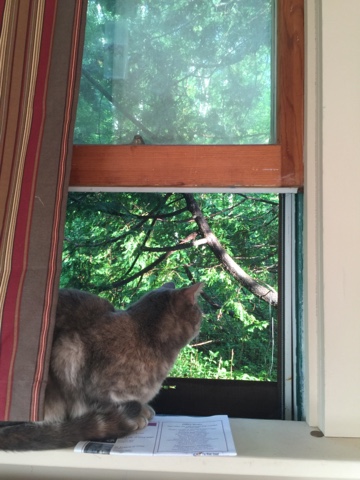 It is one thing to wake up of a morning, and another thing to not know anything else.
Not the idea of the room but the room itself. Out of the work the work itself. 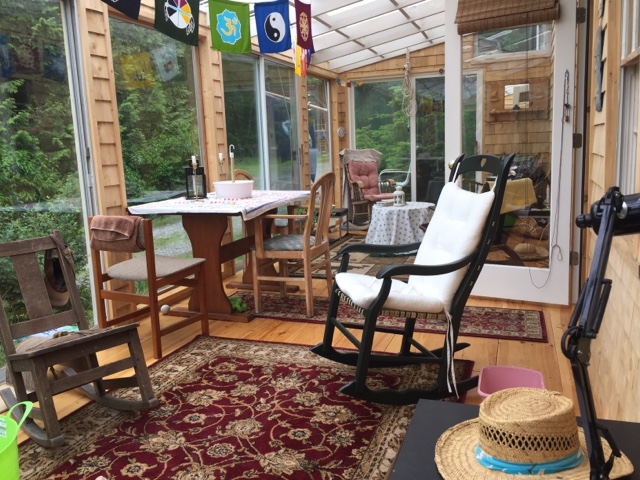 Posted by meetingbrook at 5:44 AM

are and are not

I glanced at a job description for a position in the local parish. I looked up. When I looked back at it four and a half decades had passed. I realized there are things inside things, dolls inside dolls, and as morning unfolds, sun rising, Gregorian chant playing, my glance turns to natura.

Eriugena's theology centers on the notion of an infinite, incomprehensible, transcendent God --"the immovable self-identical one" -- whose freely willed theophanies (divine manifestations) alone can be apprehended by created intellects such as angels and human beings.
...
Natura is defined as universitas rerum, the 'totality of all things' that are (ea quae sunt) and are not (ea quae non sunt).
(--Dermot Moran, Johannes Scottus Eriugena, in The History of Western Philosophy of Relinion, ed. by Oppy & Trakakis, c.2009)

I'm glad to have walked within and circumambulated the Catholic Church. I have done so as an idiorhythmic monastic mendicant.

Something I have come to understand slowly over my lifetime is that nature, earth, the world—whatever you call it—is not simply something I am on but something I am. It is not outside of me: it is me, and I am it. There is no outside.(—Paul Kingsnorth, "The Witness")

The outside makes me lonely. The inside finds me alone.

The mystery and mysticism silently surround the place I pass through.

I am content as, Camus suggests, was Sisyphus.
Posted by meetingbrook at 6:47 AM

The foolish want perfection.
The ordinary person wants to get through.
The empty minded says "thanks for this" -- and steps aside.
Posted by meetingbrook at 11:32 PM

Looking back, I thought I missed the liturgical celebrations of the Sacred Heart, and the Immaculate Heart of Mary, doing prison, nursing home, helping with a woman needing medical/support help.

On reflection, these hearts beat without me.

Posted by meetingbrook at 2:45 PM

Prison is both concrete and metaphorical.

So is birth and death.

The Incarnation announces the radical particularity of each individual and the radical particularity of the things in the world, and that the metaphysical cause of that condition of things is the birth and death and resurrection of Christ who, while being the universal God, took it upon himself to become a radical particular. This fact instigates, progressively, our transformation from being mere copies of eternal paradigms to being fully existent identities. Radical particularity applies universally: it delivers to all particulars their status as particulars; it imparts to each thing the condition of its identity, granting to it what in the past it only had as it were on loan from its eternal original. And yet the Incarnation is able to become a universal cause by becoming a particular fact. What for Platonic thought, for instance, belonged to a realm of atemporal forms or ideas, has entered history. The forms are in the world as the schemata for the things of the world, fully existing only as those things.

(--from, History and “The Thinking Now Occurring” by Charles Stein)   http://www.charlessteinpoet.com/prose/unpublished-texts/history-and-the-thinking-now-occurring/

I’ve begun to think of my visits to prison these twenty seven years as a succession of three hour sentences I serve with a bevy of cellmates with whom I meet in enclosed rooms and open areas to discuss terms, negotiating for release.


Radical Particularity Outside of the West

Humanity did not have to wait for the Christian epoch to attend and appreciate particular existence, however the course of Western thought appears, at least in one major stream of its history, to have been determined by the need to shake off the Platonic hypostatization of a realm of ideal forms supervenient upon concrete experience. Zen Buddhism, the Taoist tradition deriving from Chuang Tzu, the Dzogchen tradition in Tibetan Buddhism, and countless examples from animist peoples all give ample evidence of an anchoring of Being in the radically particular that, in terms of precise practice, far exceeds anything propounded in this regard in the West. From the perspective of these practices as spiritual perspectives, the radical particularism of the Thinking Now Occurring appears a bit like too little too late.These traditions offer many and varied forms of practice geared to explore what there is every reason to view as ontological possibilities unknown in the West. (Much of Buddhist thought, of course, abrogates ontological speculation as such.

In general, it does not seek to deny or affirm the existence of objects or the truth of concepts but seeks rather to transform our relation to that ground in our sentience from which ontological concern arises. But that does not imply the irrelevance of Buddhist experience and practice to our ontological concerns.) The cartoon version of Buddhist, Taoist, and Hindu traditions as involving the subsumption of the individual by a supra- or sub-venient continuum, begs the question of the value and nature of the ontological territory these practices open. One does not know what the Buddhist means by his nirvana without undergoing the initiation that reveals it. Gautama Buddha, for instance, refused to answer questions which to us would be essentially ontological ones, including whether there exists an individual entity that survives from birth to birth and which undergoes enlightenment—presumably because he understood that the nature of existence as experienced once the enlightenment process has been undergone is no longer what it was experienced to be prior to this. We need to be as wise as a Buddha in this respect and not exclude from our polyontology the ontological perspectives that these practices quite plausibly might open. Many of the essential practices the Buddhist practitioner masters involve a radical attention to the minute particulars of sensory and mental experience, so that experiential regions which for the Western thinker are matters of speculation, for the Buddhist are open in depth to empirical exploration. In this regard, the attention to the concrete, and in that sense the historical, is far more advanced in the East than it is in the West in spite of the fact that Buddhism does not take a full-blown interest in what we call history. What we think of as history in the sense of a running narrative of the concrete appears to the Buddhist as the run-away elaboration of mental construction.

(--from, History and “The Thinking Now Occurring” by Charles Stein) http://www.charlessteinpoet.com/prose/unpublished-texts/history-and-the-thinking-now-occurring/

Friday’s bid was full of good-time.

Every time I walk in and out the twelve locked and clanging doors to open walkway to parked car I get to experience restorative freedom, the gift of particular gratefulness, nonrestrictive movement, the invitation to arrive, to depart, and to wonder about it all.

The radical particularity of being-with one another.
Posted by meetingbrook at 2:15 PM

in the opinion of the judges

The victory goes to the heavyweight champion, and still an example of thoughtful kindness and innocent presence, the one, the only, Muhammad Ali!
[The crowd roars~]
("Yay... Yeah...Yah")
Thanks Champ!
Posted by meetingbrook at 9:07 AM