Posted by meetingbrook at 11:32 AM

look under your feet

Trying to piece together

What is in a name

Itself in fragment, a name

η γη, looks to see what is

It dawns, this day, bird-

You, alone, are, God

The ground of being

Look under your feet, freedom

Alone where each stands

Posted by meetingbrook at 4:45 AM

That’s when I began to believe in God.

carry through the cadence of each step

"What we become by way of the Cloud prayer: Nobody doing nothing nowhere."

Mobile crane stretches high and lifts float-docks from grass into water after winter grounding. Neck retracts into sheath, stabilizing legs withdraw back into body-frame, bracing logs restacked on aft-end, one walk about to secure anything not, and engine labors to pull enormous machine up hill leaving marine park.

Fish say nothing. Last year's hulled shell crop clinging to dried bottoms do not comprehend what this new dunking means.

Chill wind blows through empty spaces where docks, piled one upon the other, leave yellowed grass for healing sun to green.

Family of cyclists, jacketed in glo-lime, walk their bicycles up the steep incline. after lunching by Andre the Seal marble.

Morning walk of 3.6 miles around hospital grounds gives shape to new medication added to all the others to slow what kills.

This week's retreat-in-place, fast-in-hermitage, zazen-in-cell-room, long walks twice a day, audio books on Meister Eckhart, Cloud of Unknowing, Thomas Merton, Catholicism, and Alan Watts' inimitative observations, carry through the cadence of each step, each thumping clank of hiking poles. I leave ten pounds in the wind.

I study about terrorism, the lead-up to the two attacks on the Trade Center a decade apart, the determination of the antagonists, the despair of those trying to prevent the carnage.

A confident seagull walks up to green receptacle for its forage, but the town worker has just carted away the pickings, and seagull seems to shrugg.

The water in inner harbor has turned dark green.

There's nothing to see here.

Posted by meetingbrook at 1:28 PM

into tall buildings, that flash,

is what we are and what we

and if you pray, say

earth on earth as earth"

Posted by meetingbrook at 11:15 PM

A true zen monk has

a mountain hermitage a-

ny place he stands on

placed it in poem *

Now is here and all

And here as now is

Posted by meetingbrook at 5:36 AM

If now is all there

Is, does that mean that God is

All there is as now

when i look back, there

is nothing to see, i am

no one, gone, not there

Posted by meetingbrook at 8:58 PM

the only great tragedy in life, is not to become a saint

“The only real sadness, the only real failure, the only great tragedy in life, is not to become a saint.”      (--Leon Bloy, from La Femme Pauvre)

Derek Chauvin wanted George Floyd to be someone else. Shooters in stripmall, FedEx warehouse in Indianapolis, music concert in Las Vegas, primary school in Sandy Hook Connecticut, High School in Columbine Colorado, Grocery store in Boulder, a Synagogue in Pittsburgh, Spas in Atlanta area, a High School in Parkland Florida, a Walmart in El Paso, and the ever-continuing shootings by police of Black people in parks, alleys, streets and apartments. Shootings in churches in Sutherland Texas and Charleston South Carolina.
All gun violence is wanting those shot to be someone else. All chokings, all violence, is the wanting of someone to be someone else.
We do not want to be saints. We don't want anyone else to be a saint.

“ For me to be a saint means to be myself. Therefore, the problem of sanctity and salvation is in fact the problem of finding out who I am and of discovering my true self.” (T. Merton, New Seeds of Contemplation)

Saying this in another way, Herman Hesse writes: “ Whoever has learned how to listen to trees no longer wants to be a tree. He wants to be nothing except what he is. That is home. That is happiness.”

(--in Why Not Become A Saint? by Bob Toohey

A saint doesn't eliminate the other. A saint allows the other to be themselves. A saint becomes themself. Saints allow each to be what they are, becoming.

To be yourself in a world that is constantly trying to make you something else is the greatest accomplishment.  (-Ralph Waldo Emerson )

It is a great sorrow not be be a saint.

A great tragedy not to long to be what and who you are.

We are tempted to ask: What is the opposite of "saint"?

We are tempted to respond: "sinner."

But that's not true.

There is no opposite.

Relief, but no joy —

Smaller, non-commercial Prophet, a Pinky schooner all winter long live aboard, on closer dock, sits relieved the cold blows of winter have gone.

A penny is placed on thwart of Sam-n-Susan's green Newfoundland Dory.

In Rockport Harbor mooring balls are plopped into water, chains checked, left to bob in the tide until boaters launch in a few weeks. Loon dives below surface.

Elsewhere, anticipation awaits decision of jury in Minneapolis in trial of officer accused of murder/manslaughter against George Floyd.

Oak shadows fall across asphalt circle at edge of land.

Solo fisherman rows in from tethered boat that grazes on sparkling sunlight looking out to sea. 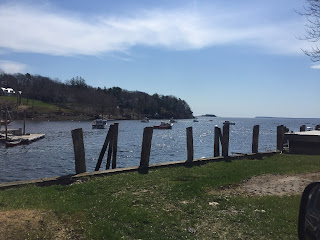 A three-legged Golden Retriever bounds over grassy stretch, happy, I suspect, to be doing so at all.
As are we all, about almost anything.
Posted by meetingbrook at 10:50 AM

Boat lift at Rockport Marine swinging cradle slows and stops. Docks are in. Gangplanks set on Marine Park side of harbor head, flags at half-staff waver north to south. Sun holds everything in unclouded embrace.

In my view of the world, which is semi-Buddhist, semi-Hindu, the Creator and the Creature are one, and all beings whatsoever are the masks and plays and ploys of the central self, there is just this self, which plays itself through all forms, through all of us, endlessly.

(--in Four Ways to Center, by Alan Watts)

Browning's words in "Pippa's Song" draw attention to a state of being we've come look at skeptically. We want to protest his concluding lines:

THE year ’s at the spring,

The lark ’s on the wing;

The snail ’s on the thorn;

God ’s in His heaven—

All ’s right with the world!

But why protest? Is it because we see corruption and dangerous points of view emerging? Maybe because just about every day a gunner slays civilians in supermarkets, workplaces, or eating joints? Perhaps because advertisements and propaganda and lies fill airways we thought were for different uses and purposes?

We say, and are confident in our saying, "Things aren't right."

Hard to argue that pronouncement.

But aren't things always both right and not right at the same time?

And yet, it is a shared world wherein we dwell.

It is not within the power of a single individual to engineer and set the causes and conditions for everyone else in its landscape. Hence, the difficulty of living in such a diverse uncontrollable ecosystem of mineral, insect, animal, and (so-called) rational animal on the planet. Not to mention Watts' creator, urges and demiurges, all sharing the walkways and trails of countryside.

One being cannot determine One-Being.

But one person can look out and see the world as it is in itself.

As it is in itself is prior to the determinations made by preference, opinion, and judgment.

We long to know if that ground of being is right, and good, and just. As if such an understanding mind and heart would make it so.

All the world’s a stage,
And all the men and women merely players;
They have their exits and their entrances;
And one man in his time plays many parts,

(--from, Speech: “All the world’s a stage” BY WILLIAM SHAKESPEARE, (from As You Like It, spoken by Jaques)

The part I play, the part you play -- has someone written it? Or are we part of an improvisation playing off one another creating scene after scene, opening and closing, an open-air theater for an audience on edge of seats ready to jump up and continue the endless scenario of creative discourse and intercourse and recourse to one another in playful, joyful, aesthetic.

Yes, that's it. The play of aesthetic interconnection. That's what we are.

And we are becoming, (i.e. attractively suitable).

As we become what we are to be.

Posted by meetingbrook at 8:01 AM

God knows what to

With prayer, while I only

It is time I

Posted by meetingbrook at 3:35 AM

drop by drop in america

Posted by meetingbrook at 3:59 PM

feeder runs under over-

Posted by meetingbrook at 6:50 AM