The day was already laden. Hiroshima is remembered. Transfiguration is celebrated. Silent sitting gathered four of us to be still, to chant, to listen to a reading, then have a circle reflection where each of us offer a response from our practice. We read "In Sync" from the current issue of Shambhala Sun: "When body and mind are synchronized, SAKYONG MIPHAM says, we can live with grace and dignity, grounded and in harmony with the world around us."

The theme of bravery radiates throughout the Shambhala teachings, which were introduced to the West by my father, Chögyam Trungpa Rinpoche. The first kind of bravery is being free of deception. Through meditation we are less seduced by afflictive emotions and habitual patterns, so we’re not as frightened by egolessness. We are able to leap into the moment—which is the second type of bravery. Having taken that leap, we gain the vision of the Great Eastern Sun, the third kind of bravery, which reveals the sacredness of our world. Through that sudden display of courage, our whole world is illuminated. As my father put it, “You begin to experience basic goodness reflected everywhere.”

From that act of freshness, our mind is liberated from doubt and disbelief. Such a visionary approach leads to the fourth level of bravery: realizing the dignity of body and mind being synchronized.
(-- Shambhala Sun | September 2011, Excerpt from "In Sync")

Then there was the news from Afghanistan:

KABUL, Afghanistan — In the deadliest day for American forces in the nearly decade-long war in Afghanistan, insurgents shot down a Chinook transport helicopter on Saturday, killing 30 Americans, including some Navy Seal commandos from the unit that killed Osama bin Laden, as well as 8 Afghans, American and Afghan officials said.

The helicopter, on a night-raid mission in the Tangi Valley of Wardak Province, to the west of Kabul, was most likely brought down by a rocket-propelled grenade, one coalition official said.

The Taliban claimed responsibility for the attack, and they could hardly have found a more valuable target: American officials said that 22 of the dead were Navy Seal commandos, including members of Seal Team 6. 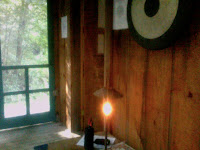 Someone at practice this morning said it was difficult for him to see the underlying perfection and goodness during the "samsaric depression" mentioned by Sakyong Mipham. That we cannot determine or control the events in Afghanistan, Somalia, Lybia, Syria, or the economic ghettoes of political pushers -- is cause to remind us of the need to go deeper into the silence beyond mind-noise and ego-shouting that deafens us.

Helping each other, service without requirement of recompense, praying for everyone and everything in the world -- these things assist the way we look at and see the world.

The Transfiguration story of Mount Tabor is iconic. The mythic resonance is inviting.

Let us run with confidence and joy to enter into the cloud like Moses and Elijah, or like James and John. Let us be caught up like Peter to behold the divine vision and to be transfigured by that glorious transfiguration. Let us retire from the world, stand aloof from the earth, rise above the body, detach ourselves from creatures and turn to the creator, to whom Peter in ecstasy exclaimed: Lord, it is good for us to be here.
It is indeed good to be here, as you have said, Peter. It is good to be with Jesus and to remain here for ever. What greater happiness or higher honour could we have than to be with God, to be made like him and to live in his light?
Therefore, since each of us possesses God in his heart and is being transformed into his divine image, we also should cry out with joy: It is good for us to be here – here where all things shine with divine radiance, where there is joy and gladness and exultation; where there is nothing in our hearts but peace, serenity and stillness; where God is seen. For here, in our hearts, Christ takes up his abode together with the Father, saying as he enters: Today salvation has come to this house. With Christ, our hearts receive all the wealth of his eternal blessings, and there where they are stored up for us in him, we see reflected as in a mirror both the first fruits and the whole of the world to come.
(--From a sermon on the transfiguration of the Lord by Anastasius of Sinai, bishop, "It is good for us to be here.") http://www.universalis.com/readings.htm

For me, the word 'here' covers it nicely. 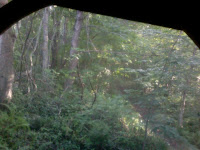 As I sit on the porch of the meditation cabin wrapping the leather sleeve edge of my rowing oar with tarred string I hear this phrase with a new clarity -- It is good for us to be here!
What is good resides in the profound and supremely mysterious 'here.'

We seldom visit it.

The route is little known.

It goes by way of silence.

Listen with a listening sighting here.

Posted by meetingbrook at 5:33 PM

I like Walt's poems. He likes them to rhyme. They have humor. In his nineties, he worries about his wife who is not well. Each fortnight is a delight to see them.

The debate continues about bodies and what is entailed with them.

Till now you seriously considered yourself to be the body and to have a form. That is the primal ignorance which is the root cause of all trouble.
- Ramana Maharshi (1879-1950)

Went rowing at dusk. My body is still chilled.

Something blah this way hovers.

I hardly understand anything.
Posted by meetingbrook at 10:05 PM

The world we see is the world we get. And when that doesn't seem such a good deal, look again. There's something we're not seeing.

Step back on your own to look into reality long enough to attain an unequivocally true and real experience of enlightenment. Then with every thought you are consulting infinite teachers.
- Yuan wu (1063-1135)

Semel in anno licet insanire. ("Once in a year one is allowed to go crazy").

We don't yet comprehend that war is insane.

Nor that there is no one else to fight other than ourselves.
Posted by meetingbrook at 11:07 PM

The body does not know how to discourse or to listen to a discourse. This which is unmistakably perceivable right where you are, absolutely identifiable yet without form, this is what listens to the discourse.
- Rinzai (d.867)

Then, enjoy the discourse.

One word at a time.
Posted by meetingbrook at 11:15 PM

Tide lowers. Ducks jete on to unsubmerged rocks covered with seaweed, nibble a bit, then tuck heads back under feathers. Nap time.

Mass, coffee, and novel Neverness at landing of Camden Harbor before going to other side to bail Jootje after last night's torrential rain and lightning storm.

When you are free and independent, you are not bound by anything, so you do not seek liberation. Consummating the process of Zen, you become unified. Then there are no mundane things outside of Buddhism, and there is no Buddhism outside of mundane things.
- Yuan wu (1063-1135)

You must not go towards equality, but must start from equality. Starting from equality does not presuppose that everyone in the world has equal opportunities to learn, to express their capacities. That's not the point. The point is that you have to start from the minimum equality that is given. The normal pedagogic logic says that people are ignorant, they don't know how to get out of ignorance to learn, so we have to make some kind of an itinerary to move from ignorance to knowledge, starting from the difference between the one who knows and the one who does not know.
(--Rancière, Jacques and Lawrence Liang. "Interview with Jacques Rancière." in: Lodi Gardens, Delhi. February 2009. English)

What we don't know we know.

Tearing what we know and don't know from what we think we know or not know is the work of learning -- investigating what is torn.

Glimpsing what is between us -- in that torn place -- also helps.
Posted by meetingbrook at 9:06 AM

"A good traveler has no fixed plan, and is not intent on arriving."
- Lao Tzu

Life is it's own destination.

Summertime, and mornings are meditation in quiet spaces.

As soon as you sense any lingering or obstruction,
all of it is false imagining.
Just make your mind clean and free,
like space, like a mirror, like the sun in the sky.
- Yuan wu (1063-1135) 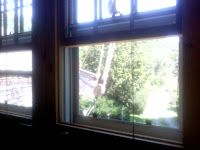 We pray for those whose own prayer needs companioning.

For those whose death is nearing, or has occurred -- recently, or further back, those lingering just on the edge of eternity.

For those whose story confuses them and those who long to be free of stories no longer needed, no longer theirs. 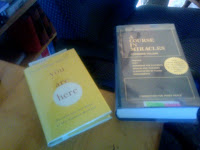 What would you see? The choice is given you. But learn and do not let your mind forget this law of seeing: You will look upon that which you feel within. If hatred finds a place within your heart, you will perceive a fearful world, held cruelly in death's sharp-pointed, bony fingers. If you feel the Love of God within you, you will look out on a world of mercy and of love.
( --from Lesson 189, paragraph 5, A Course In Miracles)

The day belongs to itself as we belong to ourselves as God belongs to everyone and everything.
Quiet spaces invite us in to reflect on and become what they are.

Until we are all praying for each other in whatever manner each prays.

As we come to see one another.

It's all gift!
Posted by meetingbrook at 8:47 AM