You see, darling,
The biggest problem was that they

Nor could they agree, therefore,
On whether they all had equal value. Value

They measured, not merely by the fact of breath,
Rendering value obsolete
As a matter of course, but by paper
Dyed into various colors. (They could not agree

On a single color, colors were very
Hard for them, darling.) And that paper

That was dyed and used to measure
Value, passing from hand
To hand, from lover to lover
And so on and so forth,

Created the very air they breathed
Which, though of life, was, to them,

Not of value. And so we know
They had gifts great enough to see

Into and out of their condition: the voices
They sang with, the music and poems
And toward the end, before the fire rain
Came and the oceans lifted and merged into one,

Even the structures they lived within
Which healed them as they slept. And though

The minds of many were truly formidable, truly
Formidable, the hearts of some

Alert and alive, they were so detached
From one another, even from those they chose
To birth or raise or walk beside, often existing
Entirely in their bodies, or not at all,

They required something they called a self
Which I think, darling,

Meant they would have believed that
You were not I—

Not ever—
Which, to us, now, would seem silly, wouldn’t it? 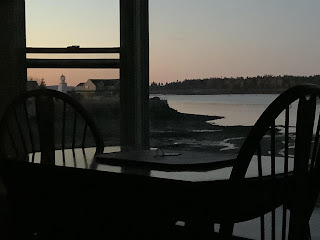 St. Andrews, New Brunswick, Canada
Posted by meetingbrook at 6:41 AM

if that's all there is

I asked someone what they thought about the story we read

They said it was one point of view, as though done

Nothing about implications, import,

yes
Posted by meetingbrook at 8:06 AM

for sweet compassion and kindness

Someone, when we'd just arrived at 2:35am, Saturday morning, no names need mentioning, had unplugged, unbeknownst, the internet to plug in a lamp at this lovely Cape Breton farm house overlooking sloping meadow to Bras d'Or Lake in Cape Breton, Nova Scotia. We finished apple pie and ice cream just after 3:20am. Discovered the severed connection of this Sunday Morning. Hence, two days respite from internet and associated viewpoints.


Big Daddy in "Cat on a Hot Tin Roof" said it clearly and pointedly, and it resonates regarding Mr. Trump:    "What's that smell in this room? Didn't you notice it Brick? Didn't you notice a powerful and obnoxious odor of mendacity in this room?...There ain't nothin' more powerful than the odor of mendacity...You can smell it. It smells like death."
One can only trust, with joyful anticipation, that the prevailing smell will disappear soon and the White House will throw open the windows to aerate the office, to return the fresh air of truth and authentic governance.

Even escaping to beautiful Celtic Colours music does not take me far enough away from my desultory opinions.

On a cheerier note,  you’ll never guess whose event-ticket name was picked at intermission to win the signed-by-performers wood plaque at the concert we attended, https://celtic-colours.com/shows/pjilasi-a-wagmatcook-welcome/

Truth be told, I had a notion I’d win. So, I’d showered and practiced my walk (with applause) to the winner’s table. Part of my acceptance speech acknowledged my gratitude to all who love poetry and music, for their youthful exuberance for the festival and for sweet compassion and kindness. Not a dry eye in the venue. 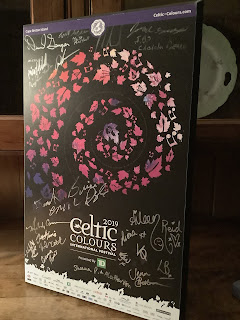