I dislike that the United States is engaged in two wars, or that we conduct assassinations, coups, secret hostilities in at least three other MiddleEast countries. I dislike that we are the major provider of guns and money to powers using both against their people or neighbors. These are troubling times.
I dislike cynicism and simple-mindedness, mine and others'. I cannot see any upside to the meanness and intransigency of right-wing propagandists and divas. I shake my head at the lack of resolve and courage on the part of left-wing placaters resulting in meaningless half-steps. I'm afraid slogans and placards have replaced the practice of reasonable dialogue.

I think we regress to a primitive and dangerous place when the only strategy used by ideologues and pretenders is fear and violence.

In the Christian metaphor, who understands the cross and crucifixion? Perhaps not even Christians. Which makes the task of moving beyond belief and egoic delusions of divisive duality desperately difficult.

Sacred Violence
No summary could convey the subtlety of the Girardian theory, and an oversimplified presentation of it would lead to misconceptions, defeating the very purpose of an introduction. Suffice it to say that Girard has uncovered the role violence plays in archaic religion and the role these religious systems play in human culture. Human history is the relentless chronicle of violence that it is because when cultures fall apart they fall into violence, and when they revive themselves they do so violently. Primitive religion is the institution that remembers the reviving violence mythologically and ritually reenacts its spellbinding climax. Primitive religion grants one form of violence a moral monopoly, endowing it with enough power and prestige to preempt other forms of violence and restore order. The famous distinction between “sacred” and “profane” is born as the culture glorifies the decisive violence (sacred) that brought an episode of chaotic violence (profane) to an end and made warriors into worshipers. Distinguishing these two forms of violence is always an extremely arbitrary affair, but that does not keep the distinction from having beneficial effects. Religion makes possible these benefits by bestowing sacred status on a socially tolerable form of violence to which the culture can resort as an alternative to greater and more catastrophic violence. “It is better that one man should die,” said Caiaphas of Jesus, “than that the whole nation be destroyed.”

Caiaphas was invoking a mechanism for preserving culture that is as old as culture itself. Whether it is the Assyro-Babylonian myth declaring that Marduk created the world by killing the monster Tiamat; or the Teutonic myth telling how Odin formed the world by raising the corpse of Ymir from the sea of Ymir’s own blood, or Pope Urban II declaring that God willed the first Crusade; or Thomas Jefferson saying that the tree of liberty must be periodically watered with the blood of patriots and tyrants; or Lenin saying you can’t make an omelet without breaking eggs — cultures have forever commemorated some form of sacred violence at their origins and considered it a sacred duty to reenact it in times of crisis. The logic of sacred violence is nowhere expressed more succinctly nor repudiated more completely than in the New Testament, where the high priest solemnly announces its benefits and the crucifixion straightaway reveals its arbitrariness and horror. The New Testament account of the crucifixion reproduces the myths and mechanisms of primitive religion only to explode them, reveal their perversities, and declare allegiance to the Victim of them. As the theologian Robert Hamerton-Kelly, one of Girard’s most astute interpreters, puts it: “Christian theology provides a trenchant critique of religion.”

The Waning Of Scapegoating Violence
There was, however, something profoundly true about what Caiaphas said. Up to this very day, cultures rely on scapegoating violence to a far greater degree than we realize. The reason culture is now in such disarray, however, is that this ancient recipe for generating social solidarity has ceased to have its once reliable effects. It has been gradually shorn of its religious mystifications, and, as a result, its ability to promote cultural order has waned. By mystifying human violence and attributing it to the gods, archaic religion endowed a certain form of physical might — usually the most powerful form — with metaphysical significance. As long as the myths that mythologized certain human violence remained in effect, this sacralized violence was able to ward off other violence or crush it with religious conviction when it arose. As the myths that divinized the violence were weakened, the difference between order-destroying violence and order-restoring violence likewise began to break down.

Which brings me back to the hole in the parlor floor (a metaphor used by the poet Richard Wilbur whereby a carpenter’s work in progress allows the observer to see the foundation of the house). As Girard explained in his next book — Things Hidden since the Foundation of the World — the hole in the parlor floor into which he had peered in Violence and the Sacred was made by the Galilean Carpenter who was publicly executed outside Jerusalem two thousand years ago. As profoundly novel as Girard’s insights seem, he insists that they simply clarify and explicate a revelation of sacred violence that has its seeds in the Hebrew Scriptures and its stunning climax in the New Testament passion story. The Carpenter made a hole in the parlor floor and Girard simply looked into it and saw there things hidden since the foundation of the world. “Thus,” writes Robert Hamerton-Kelly, “Girard points us to a possible restatement of biblical faith that places it at the center of the struggle for a culture beyond violence.”
(--from: paying attention to the sky, blog, an entry quoting Gil Baille's book Violence Unveiled, Humanity at the Crossroads, interpreting Rene Girard's work on violence.)
http://payingattentiontothesky.com/2010/02/12/gil-bailie-interprets-rene-girard// 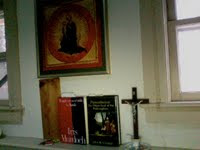 The carpenter for the bookshed leaves with his dog. He is nearing completion. He has done good work.
There's a used fed-ex truck for sale. It tempts as a bookmobile/bakemobile. It's the right size and right price. We'd have to have someone look at the engine and chassis and save us from ourselves.
Trying to be in the world nonviolently involves awareness of the impulses and thoughts urging violent responses to disrespect, dishonesty, and debilitating hypocrisy. To long for heaven is to long for a change in one's personal response so as to permit others to change their personal attacks, to change one's personal attack thoughts so as to invite others to change their responses.

To the Jewish mind, heaven is not a fixed, unchanging geographical location somewhere other than this world. Heaven is the realm where things are as God intends them to be. The place where things are under the rule and reign of God. And that place can be anywhere, anytime, with anybody.
(from Ch.1, God Wears Lipstick, in book Sex God, Exploring the Endless Connections Between Sexuality and Spirituality

I hope we haven't grown weary of the longing for heaven. Even setting aside wrong-minded location and direction, the longing itself speaks to us through deep silences. We continue the vigil. We are looking for nonviolent relationality rooted in respectful appreciation engaging dialogic solving of problems encountered in this world.
A heavenly embodiment; an emergence worth awareness!
Even here.

At this very moment.

With one another.
Posted by meetingbrook at 4:24 PM

Emergence. That's the word I left out last night in class.

To say that time is temporary is merely redundant. We have repeatedly said that time is a learning device which will be abolished when it is no longer useful. The Holy Spirit, who speaks for God in time, also knows that time is meaningless. He reminds you of this in every passing moment of time, because it is His special function to return YOU to eternity and remain to bless YOUR creations there. He is the only blessing you can truly give, because He is so truly blessed. And because He has been given you so freely by God, you must give Him as you received Him.
(from ch. V, Time and Eternity, A Course in Miracles)

That's the movement of being, existence, and knowledge. 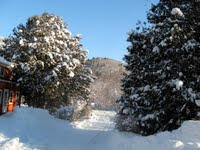 "Christ is emergence."
That was spoken in a 4th floor apartment building on Belmont Avenue in the Bronx in 1970.

Zen is this seeing through.
Posted by meetingbrook at 10:29 PM

Time is.
Running.
Out.

Of
Wednesday.
Posted by meetingbrook at 11:50 PM

We barely miss deer on route one -- but we do.

Good fortune for the moment.

A near deer death experience.
Posted by meetingbrook at 9:44 PM

"So, to come back as a worm wouldn't be a career ender?" 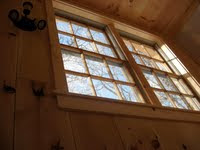 We were talking about reincarnation. It came to the possibility that "being reborn" is not the problem in the Buddhist or Hindu or even Christian tradition. Rather it is the continuation of the ego. Every atom continues. Energy has no half-life. We're all part of everything. But -- to identify yourself with what you become due to some karma is the localizing-by-ego effect of not yet having been released from the illusory control of ego.

We all come back. For a very few, it is no problem. They've been through "Mu" (or "Wu") and become what they are. For the rest of us, we so want to be this or that, attain this reward or avoid that punishment -- we fail to surrender to the facticity of emptiness, and remain a solid continuation of false identification.
He unasks.

"So, to come back as a worm wouldn't be a career ender!" 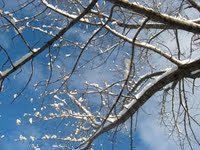 And like a man with a pool cue in his hand, circling the table, in the zone, he cleared the green felt.

The cheddar veggie chowder was delicious.
Posted by meetingbrook at 9:48 PM