even with no religion

Posted by meetingbrook at 5:39 PM

This period of life had been called "second childhood." before we had a taxonomy of dementia that dehumanized this stage. Hopkins and I are among the lucky ones, both in our eighties who, far from suffering, are shedding life's disappointments to relish the comfort an infant feels in a loving family. My short term memory is sporadic, reminding me of the myriad jokes such as "the good thing about getting Alzheimer is you can hide your own Easter Eggs" This is actually true, but it also means that finding your glasses can be frustrating, as are the names of long time friends. On the beneficial side is that the residue of cognitive function allows the possibility of focused thinking unfettered by considerations of societal opprobrium. Those who are quite lucky, facilitated by a loving relationship, can relish the pleasures of sensual emotional comfort that are transformative. For me it even allows acceptance of the reality of our nation and the world being in the hands of a single individual. Anger isn't in my repertoire, nor is hatred, as the resolution is out of my control. Too many people suffer in this final stage of life, as the industry of "eliminating Alzheimers" thrives. Suffering during this stage of life would be diminished if no longer a source of profit for those marketing costly placebos.

He draws me in. I am mesmerized by his work.

I remember him in “Instinct” (1999), a remarkable film loosely based on the novel “Ishmael”. He is riveting as the traumatized and intensely committed anthropologist Dr. Ethan Powell.

Quote:” We have only one thing to give up. Our dominion. We don't own the world. We're not kings yet. Not gods. Can we give that up? Too precious, all that control? Too tempting, being a god?” (Hopkins as Ethan Powell)

In all his work he makes me smile with gratitude that I’ve been able to view his talent and unsurpassable presence throughout career and characters.

Posted by meetingbrook at 8:40 AM

I am uncertain what to say.

Both Buddhists and Vedantists agree that this subtle ‘I’ should be given up if you want liberation, but disagree about the terminology and how belief in this ‘I’ can be annihilated.

Buddhists say: ‘There is no entity at all, no ‘self’ or ‘I’, just a sequence of causatively conditioned psychic and physical processes.’ For the rest they do not talk about an ‘I’. They even disapprove of talking in terms of ‘I’, for instance in a statement like “When we regard the nature of this knowing as being ‘me’ or ‘I’, and hold onto that concept – this is a small view, and it is confused, mistaken.”¹

Nevertheless in Dzogchen, the radical non-dualistic core of Tibetan Buddhism from which the last quote originated, a number of texts have been produced in the past in which the term ‘I’ is used, even with emphasis, to point out the highest principle, as being the ‘majestic creativity of the universe’. In one of the root texts of Dzogchen, the Kunjed Gyalpo, it is stated:

“I, the creativity of the universe, pure and total presence, am the real heart of all spiritual pursuits”; and

“Because all phenomena are none other than me, I, the all-creating
one, am the decisive experience of everything.”²

From texts like these it becomes apparent how comparative the term ‘I’ actually is. The same term that deserves to be disapproved as signifying a mistake, is apparently also used to denote the highest principle.

(—Excerpt from Introduction to: "I” Is A Door: The Essence Of Advaita As Taught By Ramana Maharshi, Atmananda And Nisargadatta Maharaj" by Philip Renard. Scribd.) 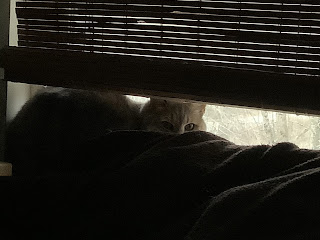 I think I am being watched.

when at drug store

Every chair a zafu

Each aisle for slow kinhin

One breath following another —

This place of zen practice

The US election is in danger from the defeated president to overturn the loss and reinstate himself for an additional four year term.
COVID new cases in the US, the news station reports, today were 189,000.
Advice from CDC is stay home for Thanksgiving, and no inside gatherings with those outside immediate families.
One name is associated with the above three sentences.
It is not worthy anymore to be spoken or written.
A repugnant individual.
A terrible time.
Still,
Be safe.
Be well.
Posted by meetingbrook at 10:03 PM

what, then, are we to do

Posted by meetingbrook at 5:15 AM

I have not come here to be alone

Alone has come here to be me.

When I am nowhere to be found

What is itself alone will be revealed

Posted by meetingbrook at 5:00 AM

Posted by meetingbrook at 7:16 AM

If I were a pessimist I’d take pleasure in the unhealthy state of the country and the unhealthy outgoing incumbent still at the helm.

But I’m not a pessimist.

I’m an unknowing being looking at a set of circumstances, causes, and conditions that suggest an ignorance and spiteful uncertainty at the fate of the 65 days remaining until a new president is inaugurated.

Time to go to war.

Time to suffer viral illness and die from negligence and inane behavior.

Posted by meetingbrook at 11:07 PM

is what is breathing in

Thich Nhat Hanh has a breathing gatha that is familiar. “ Breathing in, I know I am breathing in.”

This morning I hear it differently:

This is how we know God — by doing what God is doing.

It is a kind of knowing that doesn’t know, but is, what is God’s present activity.

vishal hriday, all there is, is consciousness

Dirk Vandersloot, the homeopathic doctor, introduced the writings of Ramesh Balsekar to meetingbrook twenty five years ago. We carried The Net of Jewels the year it was published the year we opened the bookshop.

“You have to be there to contemplate the terror of death and your impending absence therewith! Paradoxical, that you must be present first to give rise to the terror of your absence! In fact, the thought of not being here can only be contemplated precisely because you are always here! So death is an idea of absence within your presence!”      (--Ramesh Balsekar)

During one of the last satsangs of Ramesh, he used the term ‘Vishal Hriday’.

What is Vishal Hriday? It literally translates as ‘Big Heart’. What it actually means is ‘One Heart’. To place it in the context of his teaching, it translates as ‘All there is, is Consciousness’.

(--from the book Explosion of Love, in The End of Duality, by Gautam Sachdeva, writing about Ramesh Balsekar's death)

As it happens, they were good to have happened.

the next buddha, we need to find

– Thich Nhat Hanh, “The Next Buddha May Be a Sangha”

“Venerating the past in itself will not solve the world’s problems. We need to find the link between our traditions and our present experience of life. Nowness or the magic of the present moment, is what joins the wisdom of the past with the present. When human beings lose their connection to nature, to heaven, to earth, then they do not know how to nurture their environment. Human beings destroy their ecology at the same time as they destroy one another. From that perspective, healing our society goes hand in hand with healing our personal, elemental connection with the world.”

– Chogyam Trungpa, “The Sacred Path of the Warrior”

Posted by meetingbrook at 6:22 AM

within youse, between yous

This world is not what it seems. How shall I live in this troubling and mind boggling existence?

God gives us just enough tastes of God’s realm to believe in it and to want it more than anything. In the parables, Jesus never says the Kingdom is totally now or totally later. It’s always now-and-not-yet. When we live inside the Really Real, we live in a “threshold space” between this world and the next. We learn how to live between heaven and earth, one foot in both worlds, holding them precious together.

We only have the first fruits of the Kingdom in this world, but we experience enough to know that it’s the only thing that will ever satisfy us. Once we have had the truth, half-truths do not satisfy us anymore. In its light, everything else is relative, even our own life.

I can hardly wait to learn to read. ‘Midst’ is middle. The kingdom of God is between you. Or, maybe, ‘within youse.’

Posted by meetingbrook at 5:02 AM