No
Posted by meetingbrook at 11:59 PM

We could say an idea is something to see through.

The question arises, ”What do you see?”

This morning, listening to Benedictines in France chanting office of prime,

Thomas Merton, writing of his brother’s visit to Gethsemani, wrote:


He had heard something about the Holy Trinity at the Choir School of St. John the Divine. So I just said that the father was the Father and the Son was the Father’s idea of Himself and the Holy Ghost was the love of the Father for the Son, and that these Three were One nature, and that nevertheless they were Three Persons—and they dwelt within us by faith.     (—Excerpt from: "The Seven Storey Mountain" by Thomas Merton. Scribd)

The word idea comes from Greek ἰδέα idea "form, pattern," from the root of ἰδεῖν idein, "to see." [3] (Wikipedia)

There is a an activity that is available to us, at every moment and each place, during this claustrating time. It is a passing through of each being and each thing and each phantasm in our purview.

Can you see through your self?

And is Merton suggesting a way of being (a way of theology and spirituality) wherein we are a passing-through of that which is seen as an activity of trust, faith, and (yes) love?

Are we this activity of seeing? Of seeing through?

Until there is only seeing.

Where all appears as it is. And disappears into itself.

Leaving, as Dogen pointed out, no trace.

This time of claustration is one of returning to ourselves as each one of us sees what is returning to itself with the gift of through-sight.
Posted by meetingbrook at 5:34 AM

I am not
Looking for

Listening
Posted by meetingbrook at 5:45 AM

Curiously, during this time, these thoughts:


We live in a time of no room, which is the time of the end. The time when everyone is obsessed with the lack of time, lack of space . . . projecting into time and space the anguish produced within them by the technological furies of size, volume, quantity, speed, number, price, power, and acceleration . .. . As the end approaches there is no room for nature. The cities crowd it off the face of the earth .. . There is no desire for living.The time of the end is the time when men call upon the mountains to fall upon them .... It is haunted by the demon of emptiness. And out of this unutterable void come the armies, the missiles, the weapons, the bombs, the racist murders, and all the other crimes of mass society. ("Time," pp. 70-71)

In such a world where the mechanized, "the technological furies" obscure the natural, Merton foresees humans confronting " not necessarily the end of the world, but a .. . point of no return, a climax of absolute finality ... in absurdity" ("Prologue," p. 4). In such a world, humans have no place, no purpose.

(--from, THOMAS MERTON'S MYTH FOR MODERN TIMES: A Tale of the City, by Gloria Kitto Lewis)

In my room, empty of anything or anyone other, it seems that everyone and everything is there.

Which is its own absurdity.


The many do not pay attention to what is right in front of their nose; and when these things are pointed out to them, they do not take note of them though they think they do.They are estranged from that with which they are always in contact.The waking have one common world, but the sleeping turn aside each into a world of his own.   ("Herakleitos," p. 96, ibid)

Elsewhere, in a review about Merton's The Behavior of Titans, these opening quotes:


St. Justin Martyr refers to Herakleitos, along with Socrates, as a “Saint” of pre-Christian paganism…the logos of Herakleitos seems to have much in common with the Tao of Lao-tse as well as with the Word of St. John.  (Thomas Merton)

Fools, when they do hear, are like the deaf: of them does the saying bear witness that they are absent when present. (Herakleitos)

He that is awake lights up from sleeping. (Herakleitos)

There is a kind of self-fulfillment that fulfills nothing but your illusory self. (Br. Steindl-Rast)

(from, Thomas Merton's, The Behavior of Titans -- 50 Year Review by Ron Dart, in Journal of Religion, Peace, and Justice, August, 2011)

And these concluding words:


We live in an age and ethos driven by false notions of the self that lead from one illusion to another. How do we find the ‘immortal diamond’ within and allow such a diamond to shine forth? Merton has offered us a variety of titans in The Behavior of Titans. There are titans such as Hesiod-Homer’s Zeus-Prometheus, the Fat Man, indulgent and cynical intellectuals and mediocre people are present but absent. There are titans such as the Prometheus of Aeschylus, Atlas, Hera and Herakleitos that can massage our soul into health and healing. Much hinges on the titan we choose to hear, heed and follow.            (--ibid)

So much hinges on being present.
Posted by meetingbrook at 4:29 PM

what is, dharma combat, without mu

Today's translation of the P[rajna] Paramita --

I hear your translation as release-thinking.

Not so much as release thinking.

Release-thinking is a thinking that lets go (and “let’s go!”) in a constant act of release all we’ve been holding on to, moving us toward what is becoming more and more obviously ground and earth of what-is-truly-real.

Posted by meetingbrook at 2:27 PM

The boy in Germany
By river with cake

Shoulder to shoulder
At Oxford

There’s time
For it

Piles of papers from
Classes taught

And friend I loved
Not well but deeply

One to the other
If it could be received

Slats of sunlight
On wall over bed

During stay at home
Solitude and surrender

He has entered Gethsemani
Describing those first days

I have always been in
Monastery even while not

It is transfixion of life
Streams under melted ice

With spring remembering
The echo tumble over stones —

You cannot say ever again
One thing lost means gone

It goes on in a thousand
Branches of continuance

The thousands of lives
You’ve lived, in differing

Places, differing bodies
Differing others, all of a

Piece collecting itself
In a whole we visit in

Dreams
The only reality

Everyone shares
Without distancing

Posted by meetingbrook at 7:02 AM

My favorite time of anything.
Posted by meetingbrook at 11:11 AM

you’ve got to; hand it to them

Are in the wardrobe changing their apparel.

In their hands are the depths of the earth,

The heights of the mountains are theirs,

To them belongs the sea, for they made it

And the dry land shaped by their hands.

We’re all in
this

There is nothing else for us
It is what we are

Even if we go to deep space
We are earth there

Trees grow from it
Food and water spring up

Ground of our being
Soil of sacrifice and solace

one’s not half two. It’s two are halves of one:

no death and any quantity;but than

all numerable mosts the actual more

this every truth-beware of heartless them

(given the scalpel,they dissect a kiss;


one is the song which fiends and angels sing:


deep in dark least ourselves remembering

love only rides his year.

make peace for all of us / with what is easy.

Is it easier to be angry at Trump and administration for their ineptitude and mendacity -- or to be sad and grieving at the many deaths that continue to ravage country and globe?

Anger and sorrow seem to be inseparable these days.

Before he died a year (or is it two) ago a man who practiced with us sent photo of his altar.

It arose today from cache. 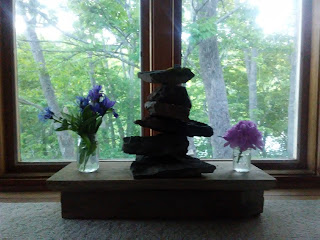 I think of him. He ended his life. He left the altar. The stones. The flowers. The feelings that linger.

Life, as far as we know, changes from movement to stillness.

Once his life moved. Now it is still.

So we sit. Or we walk. We practice.

The stones. The wood. The floor.

The flowers, the water, the vase.

The window. The trees. The sky.

Do we notice anything? Does something become obvious? Are we becoming creation becoming itself?

It is easy to be angry.

It is easy to be sad.

And then there's the poem by Robert Creeley that always sets me pondering:

and make peace for all of us
with what is easy.

Is it God's gratitude that pardons? Is God the servant? Or, is what seems to be being said what is being said?

The second couplet stands on its own.


“From now on, Brother, everybody stands on his own feet,”1 proclaims Thomas Merton on the day of his death. He was quoting an abbot who gave this advice to the Tibetan monk, Chogyam Trungpa Rimpoche, confronted with fleeing or staying in the face of an advancing Chinese communist army. Merton interprets this saying to be “an extremely important monastic statement” and asserts that “The time for relying on structures has disappeared” (AJ 338).

(--Stand on Your Own Feet! Thomas Merton and the Monk without Vows or Walls, by Nass Cannon

The new structure is no structure.

Our new ground is groundlessness.


The hermit, all day and all night, beats his head against a wall of doubt. That is his contemplation. . . . a kind of unknowing of his own self, a kind of doubt that questions the very roots of his existence, a doubt which undermines his very reasons for existing and for doing what he does. It is this doubt which reduces him finally to silence, and in the silence which ceases to ask questions, he receives the only certitude he knows: the presence of God in the midst of uncertainty and nothingness, as the only reality. (MJ 159)        (Ibid)

it was easter twice
the rising
morning light

and now bright
week, as many
tire of solitude

i propose 2 thousand
dollars a month for
everyone all year

5 trillion a year
we can do that

money grows on trees
it is worthless currency
give it away

and if you want more
money, take a job
make as much as

as long as there's
enough money for
pretzels and coffee

yoghurt and peanut
butter, the risen Christ
and the face of God
Posted by meetingbrook at 6:46 PM

Posted by meetingbrook at 9:01 AM

It is Orthodox Christian Easter.

Posted by meetingbrook at 12:11 AM