dogen would nod -- francis would smile

In prison today, after sitting and walking practice, we read Richard Rohr.


By "world," I am not referring to Creation, but to "the System." It's the way groups, cultures, institutions, and nations organize themselves to be in control. This may be the most hidden, the most disguised, and the most denied level of evil. We cannot see it because we are inside of it and because we cannot see beyond our own self-interest and self-protection. For example, I have been a Catholic all my life and I have yet to hear a sermon on the tenth commandment: "Do not covet your neighbor's goods." We live in an entire world of manufactured desire or covetousness. It is a virtue to seek to increase your goods. So it's almost impossible for an American to see capitalism or consumerism as a problem or a moral issue, because that is the way our world is shaped. It is in our hard wiring. It’s difficult to critique the ground you are standing on.

It was a good conversation.

There’s some concern at the militarization of special operations at the prison. What seems to be special forces, universal soldiers, patrolling the buildings and grounds dressed like troops in the Middle East. The men feel this new layer of force response readiness as intimidating and superfluous.  As it is, they are just that; the war, unsuccessful in the Middle East, come home to Maine, a backyard application sure to provoke nominal semblance of success.

We pay dearly for it.

It is our gross national product.
Posted by meetingbrook at 10:47 PM

(for my father)
fact is, you were good
born and died, your middle best
enough in my eyes
Posted by meetingbrook at 10:05 PM

Do you have anything to say?

We sat together, my sister and I.

Then, one of us left.

Posted by meetingbrook at 9:34 PM


Perhaps there are no words about God

Perhaps words are after God

What are we making of the silence of God?
Posted by meetingbrook at 10:12 AM

“Write me,” says the prisoner, “I want to learn to read myself reading God reading God’s self.”

And so, we write one another.

This is how God learns about God and we learn about what it means to near ourselves nearing God.

Let’s create a new literature reading ourselves reading one another reading God learning to pronounce a new world one word at a time.

At noon an Anthroposophical funeral joint between the spiritual and the earthly (as they noted) is held for one of their companions. I am 3rd to last in, occupy hallway, and am 3rd out after two mothers and their babes-in-arms. The Thomas More-looking celebrants complete their gentle story telling, prayer, and incense. Strings of lyre set the space wide and deep. Goodbye Susan.
... 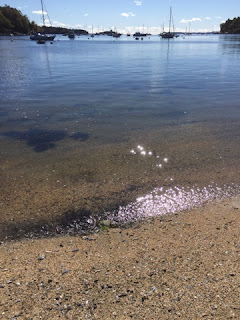 Seldom do I read anything written on this blog, but this page came up while looking for something else. I put it here because it is Monday.  http://www.meetingbrook.org/blogger/2004_06_20_archive.html

A man of the Way comes
Rapping at my brushwood gate,
Wants to discuss the
Essentials of Zen experience.
Donít take it wrong if this
Mountain monkís too lazy
To open his mouth:
Late spring warblers
Singing their hearts out,
A village of drifting petals.
- Jakushitsu (1290 ñ1367)

Grey rainy summer's day. I turn around to see where I've come from. Nothing there.

As they were proceeding on their journey someone said to him, "I will follow you wherever you go." Jesus answered him, "Foxes have dens and birds of the sky have nests, but the Son of Man has nowhere to rest his head." And to another he said, "Follow me." But he replied, "Lord, let me go first and bury my father." But he answered him, "Let the dead bury their dead. But you, go and proclaim the kingdom of God." And another said, "I will follow you, Lord, but first let me say farewell to my family at home." To him Jesus said, "No one who sets a hand to the plow and looks to what was left behind is fit for the kingdom of God."
(from Luke 9:51-62)

I don't fit anywhere it is suggested one might, or might not, fit. The road-less road the homeless travel seems a fit-less footloose flight.

On the day before Thomas Merton retired to his hermitage at the Abbey of Gethsemani he used an apt metaphor to describe for his novices the new dimension of life as a monastic hermit. The date was August 20, 1965--the eve of the feast of the great early Cistercian, Bernard of Clairvaux (1090-1153). No doubt with Bernard (the reformer and creative thinker) in mind, Merton reclaimed the essence of every monk's vocation. Only three short years would intervene before his journey to Asia where he invested himself in dialogues with Buddhist and Hindu monks. Yet on that late summer day in 1965 Merton articulated for those novices a bold imperative when he said:


"At this particular point in the monastic life people need real evidence that it is possible to go further than just simply the convoy of routine work: everybody travelling at the speed of the slowest ship."

(from “When the Heart is Right," Thomas Merton's Contemplative Contribution to Interreligious Dialogue," by George A. Kilcourse, Jr., Parliament of World Religions)

It is a solitary and uncharted descent. No provision is made for return. No return is conceived. Jesus would be surprised to learn there was a return ticket for him.

It is a Saturday afternoon filled with chirping birds, purring cat on lap, three dogs snoozing in tossed dischevel on floor.

Too lazy to open mouth, this ill-fitting hermit silence floats on precarious wave of empty listening. It is the open alone, with little understanding, conveys the silence of God passing through this, this now here, and this nowhere. This -- without end. This ñ without beginning.

This, our attentive presence.

This morning, Billy said that in prison you are prey, predator, or you swim in your own pond.

In the awakened eye
Mountains and rivers
Completely disappear.
The eye of delusion
Looks out upon
Deep fog and clouds.
Alone on my zazen mat
I forget the days
As they pass.
The wisteria has grown
Thick over the eaves
Of my hut.
- Muso (1275-1351)

In Guantanimo, prey and predator are interchanged.

According to The Washington Post, the U.S. Vice-President tells a U.S. Senator to "Go fuck yourself."

Several guys in Maine State Prison used the "F" word today describing their point of view about the chaos and control, the discomforting of the environment, and pervasive tension of prison life. We'd been reading Robert Lax on learning to live on a Greek island.

At conversation on Islam at shop this evening a woman suggested that Islamic punishment that cuts off finger, hand, or foot might be more effective and kinder than America's ten to thirty years behind bars with the predation, fear, and warping of men's minds by fear and resentment -- especially when they might carry their lessons learned with them when they walk out and return to the streets.

"Pan metron ariston" is Greek for "all things in moderation."

We need to moderate the excesses of war and the regressive paralysis of hopelessness. We need to moderate extremes of division fomented by political factions racing to far right and left with nasty rhetoric and behavioral incivility.

It is good to visit prison for conversation.

It is like mystery. The more we understand about a mystery the deeper the mystery becomes. There's no end to the depths of mystery.

Passing through prison with heart and mind a little more open is like passing through mystery with new appreciation even the smallest understanding brings.

Billy, Rusty, Chris, Ryan, Saskia and I passed through today.

Our small understanding, shared each with each around table, deepens the mystery of who we are and what God is in our moderated midst.

And Harold visited with Erika in another part of the mystery this morning.

"That big something else," is what one of the guys said of God.

Note: Perhaps ñ at end of 1st post is a mistake mutated-by-ityself after eleven years. I don’t know.
Posted by meetingbrook at 1:27 PM

Someone said it takes wording to find new expressions of existence. That, and the suspicion we are moving out of old formulations and into new articulations of as yet unpronounced coming-into-being.
We could say God is the quintessential unpronounced coming-into-being.
Perhaps God is the originating experience of contemplation.
Maybe the phrasing, for us, for now, is, acronymic-ly: Coificit Geoeoc
C o i f i c i t   e a s e