true as I am here


All you can do is hope.

When someone steps out the door, there is hope they will step back when the time presents itself. But what if not?

If not, one could only hope that the mystery surrounding absence is kind to the one gone. Kindness, it would seem, is the only remaining option of those awakening beings this side of absence.


It is worth commenting for a moment on the phrase dual practice which, itself, causes difficulties similar to our fundamental questions. When it was used at the first meeting of the ongoing working group of practitioners in both traditions at the Boston meeting of the Society of Buddhist-Christian Studies, several people objected strongly to it because they felt that their practice was one thing and not two. But is this not another way of indicating an answer to our question?

In a similar way, to use the phrase dual practice could easily be an indication of an inclination to answer the question in the opposite way. Even the similar phrase "practice across traditions" is not without its problems, for it can indicate a practice that somehow transcends the tradition it is rooted in. "Dual practice" in the sense that Roger Corless uses it, in which he practices his Christianity on alternate days with his Tibetan Buddhism, and is a rather dramatic symbol of his openness to our fundamental questions and could be taken as an answer to our question, i.e., the practice is dual because Zen meditation and the life of prayer are two different things. 77 All this illustrates once again how beneath the surface of the current Buddhist-Christian dialogue powerful currents exist generated by our basic issues.

When meetingbrook first worded its interest in looking to embody the dwelling place of the Alone, to step aside making room for Another, it used the words “practicing between traditions.”

Between.
“in the space separating, in the middle of, with one on either side; amid, amidst; archaic betwixt.”
(--apple/google dictionary)

The emphasis is not on what is separated, but on the space separating. The space between.

I’ll meet you there.

COLLAPSE
Posted by meetingbrook at 7:54 AM

the final experience of God

Blackbird, to say, is waiting for this moment to arise.

The world you see is just a movie in your mind.

Bless and sit down.

Practice kindness all day to everybody

and you will realize you’re already

off. I will try to teach it but it will

end up in a shack

Rokie lays near screen door looking out to Englishtown ridge. It is a mild morning twilight. Door is swung back.

I read about Taoist-buddhist thinkers' viewing of christian metaphor and practice.

They ask themselves: "Is there such a thing as a fixed, unchanging tradition or culture or religious consciousness? What does it really mean to be faithful and loyal to tradition?" And they answer: "These questions force us to turn to inner experience as the only foundation for advancement and expansion of consciousness." 52 And they take as their patron Henri Le Saux, Abhishiktananda, who they feel has done from the advaitan, or nondual, point of view what they would like to do from a Taoist and Buddhist one. Let’s see what kind of language this perspective gives rise to. While we make clear distinctions, for example, between creatures and God, the human and the divine, nature and grace, and so forth, we need to realize that: "the real God is different from all such categorization. In the final experience of God there is no question of separation, distinction or relationship." 53.
(-- from CHRISTIANITY IN THE CRUCIBLE OF EAST- WEST DIALOGUE: A Critical Look at Catholic Participation By James Arraj Originally published by Inner Growth Books, LLC, 2001, Loc 432, kindle edition)

The wind cares only to blow. Blackbirds only to caw. Ground cares only to allow, cultivate, and generate seed flourishing. Trees care only to wave branches to rhythm of passing wind, bird, squirrel, and insects.

I care only to see this through.

Earlier in his letter quoted by Maria Popova, Kerouac wrote:


I have lots of things to teach you now, in case we ever meet, concerning the message that was transmitted to me under a pine tree in North Carolina on a cold winter moonlit night. It said that Nothing Ever Happened, so don’t worry. It’s all like a dream. Everything is ecstasy, inside. We just don’t know it because of our thinking-minds. But in our true blissful essence of mind is known that everything is alright forever and forever and forever. Close your eyes, let your hands and nerve-ends drop, stop breathing for 3 seconds, listen to the silence inside the illusion of the world, and you will remember the lesson you forgot, which was taught in immense milky way soft cloud innumerable worlds long ago and not even at all. It is all one vast awakened thing. I call it the golden eternity. It is perfect.

Echoing Watts’s philosophy on death, Kerouac considers the illusion of the solid “self” as he contemplates the life and death of mountains:

We were never really born, we will never really die. It has nothing to do with the imaginary idea of a personal self, other selves, many selves everywhere: Self is only an idea, a mortal idea. That which passes into everything is one thing. It’s a dream already ended. There’s nothing to be afraid of and nothing to be glad about. I know this from staring at mountains months on end. They never show any expression, they are like empty space. Do you think the emptiness of space will ever crumble away? Mountains will crumble, but the emptiness of space, which is the one universal essence of mind, the vast awakenerhood, empty and awake, will never crumble away because it was never born.

There is a settling into what is that surprises. Everything, everything, is what it is. If I come to see this, accept this, and quietly move through this -- then everything is what it it is and I am moving through what is.


“Let nothing disturb you, Let nothing frighten you, All things are passing away: God never changes. Patience obtains all things. Whoever has God lacks nothing; God alone suffices.”[1] (--St Theresa of Jesus, born in Avila in 1515)

(there is
nothing else)

Posted by meetingbrook at 7:43 AM

rower in orange and green

Innis wears a baseball cap with “B” on it. He seems part of the weathered and aged rocks surrounding his harbor house and wood-carved work. I tell him I have one too -- mine for Brooklyn Dodgers. We talk about Duke Snyder and Roy Campanella.

We bought one of his whirligigs eight years ago. We buy a second one today in Neil’s Harbor.

What they don’t say is that the doors to St Joseph’s RC church Dingwall are not open. They are locked.  A first.

We drive on.
Posted by meetingbrook at 9:30 PM

Thank you, it is good thanksgiving.

Eh?
Posted by meetingbrook at 7:29 PM

Creole music live streams from Glacé Bay even though it was performed last night. It's an Atlantic Province understanding. 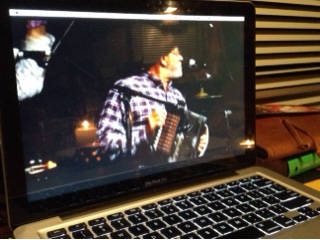 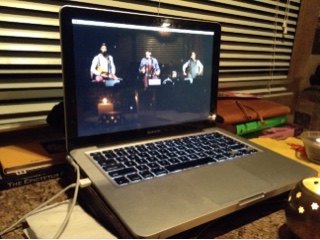 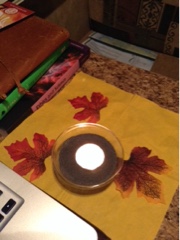 Posted by meetingbrook at 8:15 PM